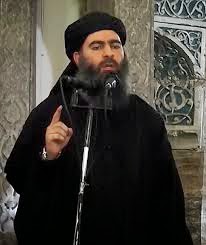 Dozens of residents of a town in eastern Libya have pledged allegiance to Abu Bakr al-Baghdadi, leader of Islamic State militants fighting in Syria and Iraq, according to a video and a resident.

Around 50 young people could be seen in a video posted on social media gathering in Derna to support Baghdadi, who calls himself “caliph”, or Muslim leader, of Islamic State, an Al Qaeda offshoot.
A Derna resident confirmed the authenticity of the video, taken late on Friday.

There has been growing concern among Western nations and Libya’s neighbours that Islamic State is trying to exploit lawlessness in the oil producer where militant Islamists and other militias who helped topple Muammar Gaddafi in 2011 are carving out fiefdoms.

United States and Arab forces have bombed Islamic State targets in Syria and Iraq since the militants declared a caliphate in the territory under their control.

Derna, a port halfway between the eastern Libyan city of Benghazi and the Egyptian border, has since 2011 turned into a gathering point for militant Islamists and al Qaeda sympathisers.

Fifteen members of Islamic State, led by an Egyptian and a Saudi national, travelled to Derna from Syria in September trying to rally support and establish an Islamic State branch in Libya, Egyptian security officials have said.

Youth driving through the town waiving Islamic State flags could be seen after the visit, according to a video on social media.

Authorities were unable to open ballot boxes for Libya’s parliamentary elections in June in Derna due to threats from militants. Militant Islamic youths also executed an Egyptian for alleged murder in Derna stadium.
Derna, already a stronghold of Islamist opposition under Gaddafi, has also made headlines with pictures of Islamic courts and police stations.