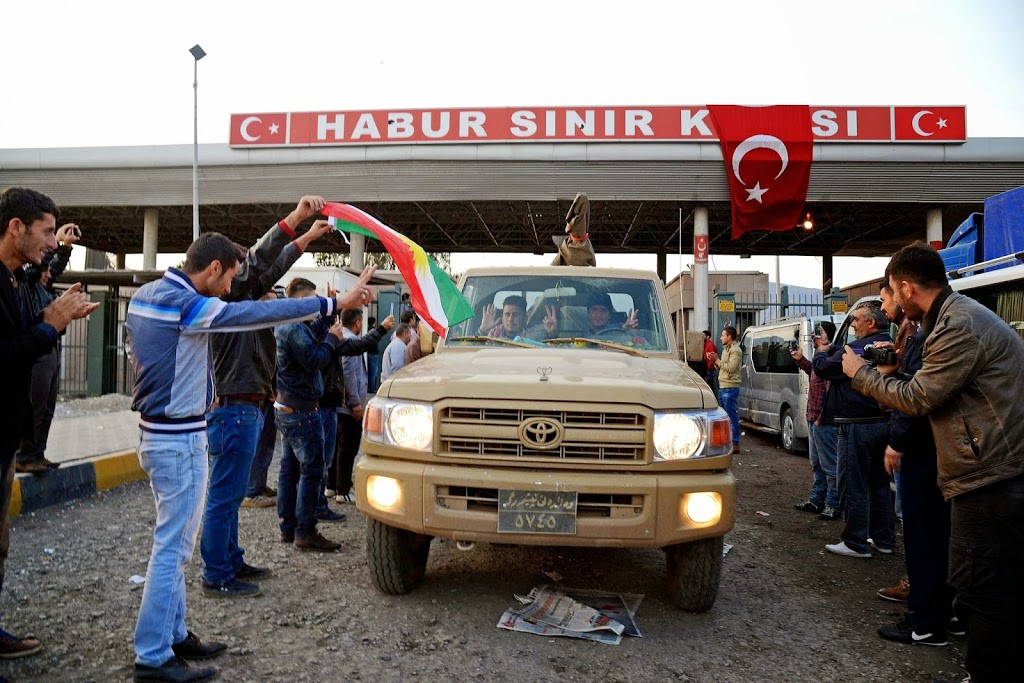 A group of Iraqi Kurdish peshmerga fighters, numbering around 200, arrived in Turkey this week together with heavy weapons that will be deployed in the northern Syrian town of Kobani to assist local Kurdish fighters as they try to roll back advances by the Islamic State (IS).
The arrival of the peshmerga, however, has prompted questions about the ability of such a limited force to alter the military situation against IS, which also has heavy weapons and a large number of highly motivated fighters. The Kurdistan Regional Government (KRG) has indicated that the peshmerga will not engage in direct combat with IS, but will merely provide artillery support and training.

Analysts agree that the underlying motive behind engaging the peshmerga in Syria is more political than military. Opinion, however, is varied as to what this motive is. Meanwhile, rumor is rife in Ankara that the government’s decision to allow the peshmerga to cross over Turkish territory has seriously riled the Turkish military.

The scenes that attended the arrival of the peshmerga in Turkey in the early hours of Oct. 29 were said to have also fueled the military’s anger. One group of 150 peshmerga fighters was flown in to Sanliurfa in southeastern Turkey from Erbil, the capital of Kurdish northern Iraq.

Another other group entered through the Habur crossing on the Turkish-Iraqi border in a convoy transporting heavy weapons. Both groups linked up in the town of Suruc later, just across the border from Kobani, which is their entrance point into Syria.

The peshmerga were greeted joyfully on their arrival in Turkey by local Kurds carrying the flags of the KRG and the Democratic Union Party (PYD), the main umbrella group of the Syrian Kurds, and chanting “Biji Obama!” (Long live Obama!).

Their chant reflects the widespread belief among Turkey’s Kurds that Ankara only allowed the passage of the peshmerga under great pressure from Washington. The arrival of the peshmerga in Habur was also marked with scuffles between stone-throwing local Kurds and Turkish security forces that used tear gas against them.

The Turkish military is known to abhor the KRG and the peshmerga, recalling that the Kurdistan Workers Party (PKK), which has been waging a separatist campaign of terror in Turkey since the mid-1980s, was allowed to lodge itself in the Kandil Mountains in northern Iraq and to use public facilities in areas under KRG control.

Meanwhile, the killing on Oct. 25 of three Turkish soldiers in plainclothes, while they were shopping in the southeastern town of Yuksekova, has merely added fuel to anti-Kurdish sentiments among nationalist Turks. The military said in a statement that the killings were carried out by PKK members.

Tellingly, the government has been intent on keeping the Turkish military and the peshmerga fighters as far apart as possible. The group of peshmerga flown into Sanliurfa Airport was carried by a passenger plane chartered from Turkish Airlines and not by military transport of the Turkish air force.

Meanwhile, the transportation of the Kurdish fighters to the town of Suruc, and their security, was coordinated by the Turkish intelligence agency MIT, which is attached to the Prime Ministry, and by Special Forces attached to the police.

Daily Hurriyet also cited sources on Oct. 31 who said the Turkish military expressed its displeasure over the presence of the peshmerga during the meeting of the National Security Council in Ankara on Oct. 30, which was headed by President Recep Tayyip Erdogan.

The General Staff is not commenting on these reports. Retired Maj. Gen. Armagan Kuloglu, a frequent commentator on security matters and a columnist for the nationalist daily Yeni Cag, nevertheless gave Al-Monitor a foretaste of the thinking in the Turkish military.

Kuloglu pointed out that it is not possible to alter the military situation against IS with this number of peshmerga fighters, even if they are armed with heavy artillery, and said the real reason behind sending the Iraqi Kurdish fighters into Syria was political.

“The principle reason, which is also being pushed by the United States, is to maintain unity among the Kurds to strengthen one of the pillars of Greater Kurdistan that is being targeted,” Kuloglu argued. He added that Washington also wanted to reduce the threat posed by IS to the KRG in this way.

Kuloglu also said that the way the peshmerga entered Turkey was highly disturbing. “There were groups carrying Kurdish flags in Turkey and expressing joy at the arrival of the Kurdish fighters, while at the same time attacking Turkish security forces. This is very odd,” he said, reflecting the anger felt not just by the military but also by nationalist Turks.

Recalling Erdogan’s insistence that the PYD was a terrorist organization, Kuloglu also pointed to the confusion he said that lay behind Ankara’s decision to allow the peshmerga to cross into Syria over Turkey.
“The government says the PYD is a terrorist organization allied with the PKK. But it opts for a course that is ultimately designed to strengthen the hand of the PYD. Logically this means it is aiding the PKK indirectly,” Kuloglu said.

He maintained that Ankara was also contributing in this way to the emergence of a regional Kurdish entity that would ultimately take in parts of Iraq, Syria and Turkey.
Other analysts also believe that the real message behind sending the peshmerga into northern Syria is political, but have different views about the motives for this.

There are those who believe that, just like the military, President Recep Tayyip Erdogan is staunchly opposed to the emergence of an autonomous Kurdish entity in northern Syria, and is using what amounts to divide-and-rule tactics, as Fehim Tastekin explains in his Oct. 28 post for Al-Monitor.

The logic behind this argument is that Ankara would rather have the KRG as a player in the region — given the close economic and political relationship it has established with the Iraqi Kurds — than the PYD.
Providing a different perspective, Ufuk Ulutas, the director for foreign policy research at SETA, the Ankara-based Foundation for Political, Economic and Social Research, which stands close to the government, also acknowledges that the main message in sending the peshmerga into northern Syria is political.

“Looked at arithmetically, this will clearly not change the game much. It could of course have a limited effect, given the heavy weaponry the peshmerga are bringing. But it is also a fact that IS moved its heavy weapons to safe areas following US airstrikes,” Ulutas told Al-Monitor.

“The main aim is to give a message to IS that Turkey and the KRG will not abandon Kobani to its fate,” Ulutas said. He said Turkey and the KRG are not to blame because the military contribution by the peshmerga is not more. He said the blame rested with the PYD and its military wing, the People’s Protection Units (YPG).

“[KRG President] Massoud Barzani said they could send more forces. It was the YPG that did not want this, because of political rather than military considerations. It does not want to loose its influence in the region,” Ulutas said.

Whatever the true motive behind Ankara’s decision to permit the peshmerga to enter northern Syria through Turkish territory, and the differing opinions on this score, let alone the aggravation this is causing in Turkey, the general consensus is that this move will not much alter the military situation on the ground.