You are here: Home / Senza categoria / Hearts, Minds, and Missiles: The US-Led Coalition’s Crisis for Support in Syria 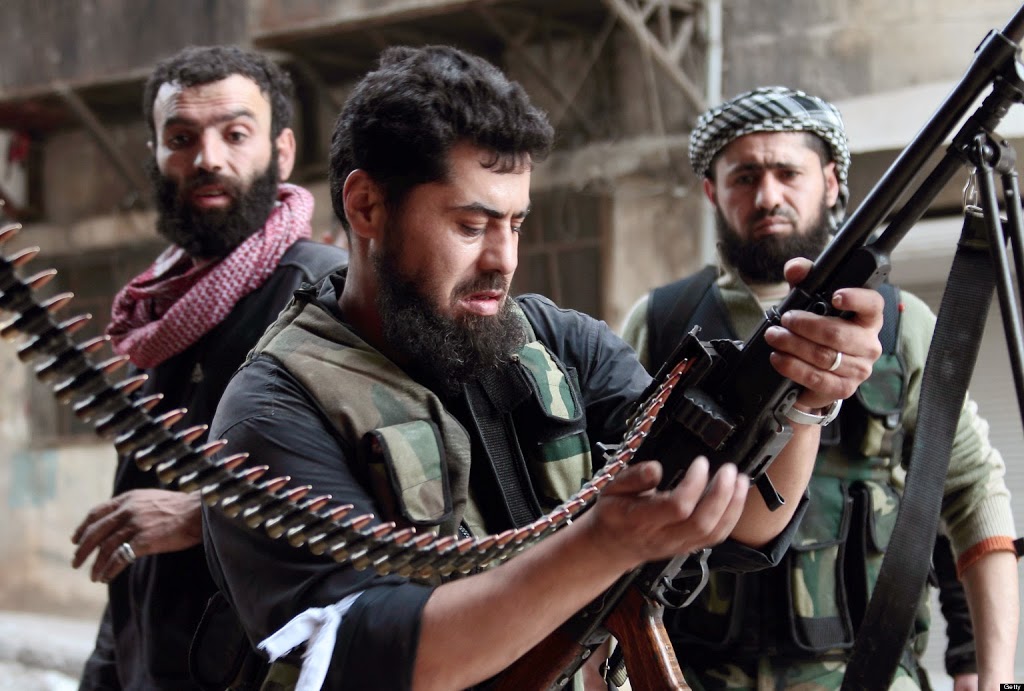 The recent defeats of two US-backed rebel groups in Syria—Harakat al-Hazm, the US’s largest recipient of support, and the Syria Revolutionaries Front (SRF) —by al-Qaeda’s (AQ) Syrian affiliate, al-Nusra Front, delivered a major blow to the US-led coalition’s fight against extremists in the country. Resulting from these attacks was the surrender of weapons and checkpoints to the group.

Perhaps worse than the losses themselves, however, was the ultimate victory of al-Nusra Front, who will gain not only land and weapons from the battle, but also further support among Syrians—something that the US and its allies have yet to obtain.

Differing Motives
The US-led coalition of Western and Gulf nations, along with a series of airstrikes, has invested in arming purportedly secular rebel groups like Harakat al-Hazm and the SRF to fight Islamic State (IS), al-Nusra Front, and other extremist forces on the ground in Syria. Groups to receive support from the US and other coalition have largely been Kurdish forces as well as those within the Free Syrian Army (FSA), an umbrella group of secular Syrian rebel groups.

These forces on the ground have been bolstered by the US government as companions in the fight against jihadist groups—namely IS. Upon commencement of US and coalition airstrikes, however, support for US assistance largely turned into criticism and condemnation.

Following the first round of airstrikes on September 23, the FSA released a series of messages on its Facebook and Twitter pages, claiming that the airstrikes were “not for the support of the grieving people [Syrians], but for eliminating what is left of it.” These messages were also accompanied by the hashtag, “#International_Campaign_on_Islam.”

“This hashtag and its accompanying statements, which characterize coalition airstrikes as a war on Islam, ring very similar to that of jihadists and Islamist groups,” says SITE Director Rita Katz. “Here, the FSA leadership is using the airstrikes as a way to gain support from Syrians and the Muslim community at large, using the same rhetorical tactics as groups like al-Nusra Front or the Islamic Front.”

Even Harakat al-Hazm released their own statement and several tweets with harsh criticism against the airstrikes. In a September 24 statement, the group claimed that the airstrikes were counterproductive to their efforts:

The air strikes are considered to be an aggression against the national sovereignty and work to undermine the Syrian revolution. The continuation of the international community to ignore the calls of the revolutionary forces for unconditional arming of the Free [Syrian] Army is nothing more than a harbinger of failure and destruction that will engulf the whole region.

The group further stated that it would continue its commitment to the Syrian revolution, and “not to the dictates of the international coalition.”

Other groups have echoed similar complaints of the airstrikes—particularly to their ineffectiveness and ill-coordination. Among the most prominent of these critics has been FSA founder and Commander Riad Mousa al-Assad. In an interview, the retired commander stated that there was no “clear action strategy” or “positive advancement” from the airstrikes. He elaborated:

Even the American statements, from the American President, his Counselor, his Defense Secretary, all of them say that “the goal of it [the airstrikes] is not to eliminate the Islamic organization [IS] but to prevent the expansion of the organization, this means that he gave an opportunity for Bashar al-Assad regime to advance more and achieve more victories.

Similarly, Ayman Abdul Wahab, leader of the FSA-affiliated Eastern Tawhid Brigade, stated that the airstrikes have been “entirely inadequate because no cooperation has been made with the opposition armed forces of FSA brigades and YPG [Kurdish] forces on the ground.”

Perhaps the most notable blunder of ill-coordination, as claimed by FSA spokesman Hussam Al Marie, was the coalition airstrike aimed at an al-Nusra Front base located in rural Idlib that landed “only 200 meters from the Free Syrian Army.” Such mishaps have been detrimental to the coalition’s stance among rebel groups in Syria.

FSA – NF Alliances
A closer look at the statements and cooperation among Syrian rebels and civilians reveals that disdain for the coalition operations has contributed to support for extremist groups. Important to note of the initial coalition missiles touching down on September 23 in Aleppo was their target: al-Nusra Front.

Immediately following these attacks, Syrian fighters and civilians responded in outrage. Hadi al-Abduallah, a member of the Syrian Revolution General Command and a prominent figure of the Syrian revolution in Homs, tweeted bitterly on September 23 that “The Nusra Front, more than any other rebel group fighting the Assad regime…yet more than 15 of its members were martyred after being targeted by the Coalition Forces in Idleb today.”

On the same day, civilians began to protest the events throughout various towns and cities. In Idlib, protestors took to the streets chanting, “With our soul and blood we defend you, Nusra,” and “We are all al-Nusra!” The protests would continue into October, with one pro-Nusra Front tweeting a picture of protestors waving the flag of al-Nusra Front, described as “Scenes from a pro-AlQaeda/JN rally and anti US strikes in Syria.”

These protests are the result a game that al-Nusra Front has been playing all too well: tap into the psyche of the war-tired people and perpetuate the narrative that the US and its allies are not only at war with Islam, but on the side of Assad. Whereas IS has largely operated as a pillaging force across cities and villages in Syria, al-Nusra Front has succeeded in winning the hearts and minds of Syrian populations.

On October 12, for example, the Idlib provincial division of al-Nusra Front released a video showing fighters evacuating their locations so as to protect civilians from coalition airstrikes. In making such gestures, al-Nusra Front is able to prop itself as an invaluable player in toppling the Assad regime, despite its foreign leadership and radical vision for Syria’s future.

Chatter among fighters has also spoken of unity between al-Nusra Front and supposedly secular rebel groups. “MahajiriShaam,” an al-Nusra Front fighter and prominent online jihadist personality, claimed such positive relations on October 31 while battling against the SRF. The fighter stated:

The hope of the west s that these attacks on the filth Jamal Ma’rouf [leader of the SRF] will backfire on JN causing a widespread attack of “moderate” rebel groups. Not knowing that JN has such good relations with what they call “moderate” groups. They will be amazingly surprised!

He stated that some of these groups mistakenly think they are “deceiving the Americans” into giving them weapons, and that they won’t have to respond “to pressures that will be placed upon them” from the West. He followed up:

All the groups that put their hands in the hands of the West or the enemy for this reason have reached the point of being a pawn in the hands of this enemy, and after the end of their role they will be thrown away, as they threw away others in the past.

Additionally, statements by the FSA indicate that al-Nusra Front is gaining more than just cease-fire agreements. A statement on the FSA’s Facebook page even tells of an agreement made in October with al-Nusra Front. According to the message, the two groups both came to terms regarding countryside locations in Hama and Idlib, agreeing to release their respective prisoners and focus more on combating the Assad regime.

A November 5 Twitter announcement made by Riad Mousa al-Assad indicates the extent of the FSA’s cohesion with the group. In the message, which was also retweeted by the FSA’s Twitter account, he claimed that the group’s forces fought alongside al-Nusra Front against the SRF on November 1, stating:

All the factions and Battalions participated in Jabal al-Zawiyah [in Iblib] along with the al-Nusra Front to finish up [eliminate] Syria Revolutionaries Front and not as what was promoted by the paid media.

“The FSA’s commander proudly announced to be fighting alongside the AQ branch against what was once was an allied group to the FSA,” says SITE Director Rita Katz. “The FSA’s choice to fight against the SRF marks a symbolic blow to secularist end goals in Syria and highlights a greater common goal across differing ideological camps on the ground: defeating the Assad regime.”

Conclusion
Coalition airstrikes in Syria, though temporarily offsetting groups like IS and JN, come at a high price. As airstrikes have evidently come with little to no coordination with rebel groups, US and coalition governments appear not so much as saviors, but as self-interested Assad allies weakening the Syrians’ revolution.

“Though they lost people and bases, especially in the first days of the airstrikes, al-Nusra Front gained tremendous support from rebels as well as Syrian people,” says Katz. “Among these people, al-Nusra Front is seen as the main winner.”

Since the commencement of the airstrikes, al-Nusra Front has reported military victories over the Syrian government and its allied forces in Aleppo, Damascus, and Quneitra governorates. More, the group has also published pictures of new offices in Idlib and Aleppo.

As al-Nusra Front fights for support of Syrians, resentment among the country’s rebels and citizens will only become more poisonous to the US and its allies. Strangling this extremist vacuum in Syria will require not only the coalition’s provision of weapons to rebel groups, but also coordination and a better establishment of shared motives between them.