You are here: Home / Senza categoria / IS releases 5 statements of allegiance to Abu Bakr al-Baghdadi within 24 hours 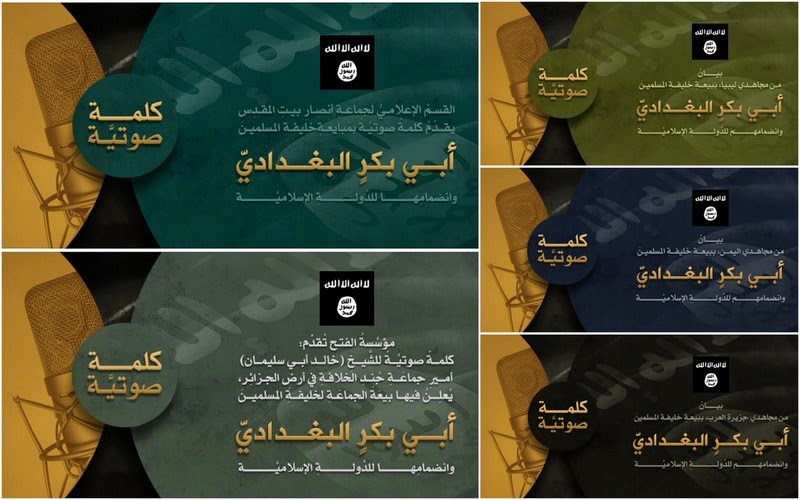 Among those to pledge was the Sinai-based Ansar Beit al-Maqd (also known as Ansar Jerusalem), along with unidentified collectives of fighters representing different countries and regions: “Mujahidin of the Arabian Peninsula,” “Mujahidin of Libya” and “Mujahidin of Yemen.” However, a closer look into these pledges raises questions regarding their authenticity and the underlying intentions of IS with their release.

With these pledge, IS also released a restatement of allegiance from the Algerian-based jihadist group, Jund al-Khilafah, which beheaded French hostage Hervé Gourdel this past September.

Pledges to IS have been made sporadically since the group’s declaration of the Caliphate on June 29, 2014. However, these rampantly released pledges from the last day far exceed the frequency of those made in previous months, and differ in delivery.

Previous pledges to IS, including those of the “Caliphate and Jihad Movement” in Pakistan, Mujahidin Indonesia Timor (MIT), Ansar al-Khilafah in the Philippines, and Jund al-Khilafa in Algeria, were often made in video formats so as to establish legitimacy. More, most of the pledges over the last four months (roughly two dozen) were published by the groups’ own official accounts.

However, the pledges from this past 24 hours—with the exception of the group located in Egypt, Ansar Beit al-Maqdis, which also released the statement through its own channels—were all published by IS. This marks the first time IS has released other groups’ pledges through its own outlets.

Furthermore, these statements lack validating visual elements, hence raising questions about their authenticity. It would be within reason to consider that these statements of unidentified fighter collectives from Yemen, the Arabian Peninsula, and Libya could have been written and produced by IS fighters.

Along with their matching branding by IS, these messages also seem to be composed from a similar template. For example, all of these speeches contain within them the same statement of allegiance to IS and Baghdadi word for word:

Therefore, in obedience to the order of Allah (’azza wa jall) and in obedience to His Messenger (sallallahu ‘alayhi wa sallam), ordering not to divide and to stick to the jama’ah, we declare our bay’ah (pledge of allegiance) to the Khalifah Ibrahim Ibn ‘Awwad Ibn Ibrahim al-Qurashi al-Husayni, pledging to selflessly hear and obey, in times of hardship and ease, and in times of delight and dislike. We pledge not to dispute the matter of those in authority except if we see obvious kufr concerning which we have proof from Allah. We call the Muslims everywhere to give bay’ah to the Khalifah and support him, in obedience to Allah and actualization of the unheeded obligation of the era.
Also notable among these pledges—along with their simultaneous delivery by IS within hours of each other (three of which not attributable to a specific group or person)—was that of the Algerian group, Jund al-Khilafa, which had previously pledged two months earlier.

Clearly, IS suddenly felt the need to produce and release many pledges. Why?

IS, through these pledges from groups across different regions, aims to show that it reserves a strong global presence. Previously, I explained that IS is intimidated by the US involvement in Iraq and Syria, as the US is a major power capable of halting the expansion of the Caliphate. Understanding that, these pledges perhaps act as a response to President Obama’s recent authorization of 1,500 troops to be sent as assistance to Iraqi forces in battling IS.

In addition, these pledges’ releases are also timed very closely to that of recent unconfirmed reports by the Iraqi government that US airstrikes injured Baghdadi near Mosul. Regardless, the release of these pledges are meant to project power to any weakening morale among IS fighters—be it from the threatening intervention of the US, or the purported injury of their leader.