You are here: Home / Senza categoria / Ansar Beit al Maqdis calls on egyptians to take up arms against the government 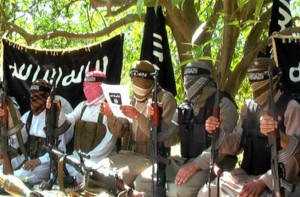 “In obedience to Allah and his prophet, who urge us to unite, not fragment, we swear allegiance to Caliph Abu Bakr al-Baghdadi,” said an audio recording posted on Twitter from an account associated with Ansar Beit Al-Maqdis.In the nine-minute recording, the militant group called on Muslims across the globe to swear allegiance to al-Baghdadi, and urged Egyptians to take up arms against the current regime.

“Neither the shameful peacefulness nor the infidel democracy would be of use to you, and you have seen the fate of those who had adopted it before,” the message addressed Egyptians.

It was not possible for Anadolu Agency to confirm the authenticity of the recording, nor could it validate the audio message from an independent source.

The group’s pledge of allegiance to al-Baghdadi comes after it had earlier dismissed claims of joining ISIL through its Twitter account earlier this month.

Egypt has been dogged by turmoil since last year’s ouster of elected president Mohamed Morsi by the army, which was followed by a harsh crackdown on Morsi’s supporters and members of his Muslim Brotherhood group.

Over the last year, the restive Sinai Peninsula in particular has seen a sharp increase in attacks on Egyptian security personnel, the most recent of which left 31 troops dead late last month.