You are here: Home / Senza categoria / Libya urges international intervention to ‘save civilians’ 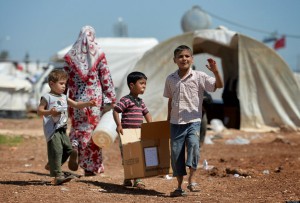 The Libyan government, which is based in the eastern city of Tobruk, called on the international community on Tuesday to “intervene” to prevent the death of civilians in western Libya.

“The international community must intervene to save civilians, especially given that protests can escalate and spread to other areas of Tripoli and to other cities,” the Tobruk government said on Facebook.

The call comes amid armed clashes in capital Tripoli between armed civilians and fighters affiliated with the Islamist “Dawn of Libya” militia movement, which opposes the Tobruk-based government.

“The international community must intervene to save civilians, especially given that protests can escalate and spread to other areas of Tripoli and to other cities,” the Tobruk government said on Facebook.

The government called for urgent international intervention, noting the approach of the first anniversary of what has been called the “Gharghour massacre,” which took place on November 15 of last year.

Protests broke out last year in Tripoli’s Gharghour neighborhood to demand the departure of armed groups from the city. Subsequent clashes resulted in the death of 49 protestors and hundreds of injuries.

Libya has been dogged by political instability since the 2011 ouster and death of long-ruling strongman Muammar Gaddafi.

Ever since, rival militias have locked horns, bringing violence to the country’s main cities, especially Tripoli and Benghazi. The central government, meanwhile, has appeared largely absent from the scene.

The sharp political divisions have yielded two rival seats of government, each of which has its own institutions.

Two assemblies currently vie for legislative authority: a newly-elected House of Representatives, which convenes in Tobruk; and the General National Congress, which – even though its mandate ended in August – continues to convene in Tripoli.

The two parliaments support the two rival governments, which are respectively headquartered in the two cities.