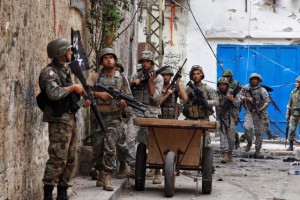 The civil war in Syria has brought a bounty of assistance to Lebanon’s military, as outside powers compete for influence and seek to prevent Islamist extremists spreading across the border.

A deal signed last week will give the Lebanese Armed Forces (LAF) US$3 billion (Dh11bn) worth of French weaponry, paid for by Saudi Arabia. The United States has stepped up a long-standing programme of military assistance, and even Iran, a backer of the Shiite Hizbollah militia – long considered Lebanon’s most powerful fighting force – has offered to arm the military.

Under the Saudi military assistance, the LAF said it has requested heavy machine guns, armoured personnel carriers, vehicles, anti-tank weapons, rockets, artillery, ammunition and communications systems. The first deliveries can be expected early next year, once the protocols are signed.

The $3bn, pledged last December, is to be spent exclusively on French weapons – a snub to the US, which Saudi Arabia felt was doing too little to help the uprising against the Assad regime in Syria at the time.

Officially meant to boost stability in Lebanon, the Saudi donation was also meant to bolster the army against Hizbollah, funded by its foe Iran, said Hisham Jaber, a former LAF general and head of the Middle East Center for Studies and Research in Beirut.

The three and half year Syrian civil war has placed greater demands on Lebanon’s army, which is regarded as a neutral institution in the country’s highly sectarian society.

Besides rebel activity along the border with Syria, there have been clashes and bombings in the country because of tensions between Lebanese supporters of the rebels, who are mainly Sunni, and of Bashar Al Assad, a member of the Allawaite community, a sect that is an offshoot of Shia Islam.

These have been heightened by Hizbollah fighting in Syria alongside the forces of the Assad regime, which is also supported by Iran.

Since the Saudi aid announcement last December, Islamist militants have developed a presence in Lebanon.

The LAF fought off fighters from ISIL and Jabhat Al Nusra, an Al Qaeda affiliate, on the Syrian border in Arsal in August and again in the north of the country, including Lebanon’s second-biggest city Tripoli, last month.

Although these battles were won, they came at a high price; at least 30 soldiers were killed, and 22 soldiers and policemen have been kidnapped.

As the threat has grown, so has the Saudi assistance. In August, Riyadh announced an additional $1bn for Lebanese security forces, including at least $450 million for the LAF. Part of that money is being spent on two US armed Cessna aircraft, which will be able to fire Hellfire laser-guided missiles.

Other suitors have also appeared on the scene. Iran made an offer of military aid in September, and discussed it further during a visit last month by Lebanese defence minster Samir Moqbel. Tehran offered tank ammunition, artillery and heavy machine guns, according to Iranian media.

Brigadier General Ali Kanso, an army spokesman, said whether the LAF accepted Iran’s offer was a political decision, but he had seen “no signs, no answers, nobody saying it’s available”.

Critics of the Iran deal, primarily politicians aligned with the anti-Syria March 14 faction, point to a 2007 UN embargo that limits the import and export of weapons by Iran.

Despite the embargo, Iran signed a $195m deal with Iraq last November for the supply of weapons and ammunition, and in August provided arms to the Kurdistan Regional Government, whose peshmerga forces are helping to retake parts of the country under ISIL’s control.

Hizbollah has expressed support for the deal with Iran, with member of parliament Nawwaf Musawi claiming on Monday that “no other country aside from Iran is willing to offer quality and effective weapons capable of defeating Israel”.