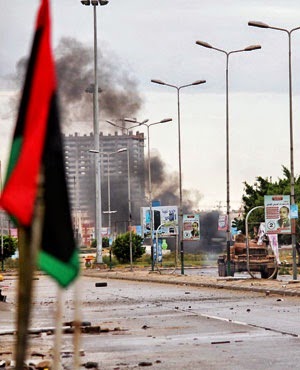 Armed clashes broke out in Libya’s capital Tripoli closing down the city’s main working airport, local residents and an official said on Sunday.

Tripoli has been mostly calm since the Libya Dawn force, an armed faction allied to the city of Misrata, took over the capital in the summer and set up its own government in rivalry to Prime Minister Abdullah al-Thinni.
It was not immediately clear who was involved in Sunday’s fighting, and there was no confirmation from health authorities of any casualties.

A spokesperson for the civil aviation authority said Mitiga airport had been closed because of the security situation. Mitiga has operated as the capital’s main airport since fighting in the summer damaged and shut Tripoli international airport.

Thinni’s internationally-recognised government and the elected House of Representatives are holed up in the eastern city of Tobruk, and the two factions are now vying for control over Libya and its oil resources.

In the three years since the fall of Muammar Gaddafi, Libya has struggled to overcome instability with heavily armed rival factions who once fought side by side to oust the autocrat now competing for power.