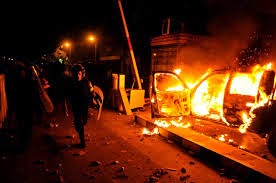 Within 48 hours, Egypt has witnessed a series of terrorist attacks from the Sinai Peninsula, the Egyptian Embassy in Tripoli, to Cairo and in the sea off the port of Damietta.
Following the terrorist attack that took place Nov. 12 in the Mediterranean Sea, leaving five Egyptian sailors injured and eight others missing, two separate attacks were conducted in Sinai, leaving five soldiers dead. Gunmen affiliated with two groups attacked two vehicles carrying a number of soldiers, forcing them to step out of the vehicles, to then be killed.

A primitive bomb exploded in an underground metro station in Cairo, which resulted in 15 passengers being injured in the panic that followed, according to official data, and not the explosion, which was small.

Another terrorist attack has targeted Egypt, yet outside the border this time, when a car bomb exploded near the Egyptian Embassy in Libya. The embassy was empty at the time and there were no losses. The incident was considered retaliation against Egypt for its alleged involvement in the air strikes on Libya and support for the forces of Gen. Khalifa Hifter and the official government against armed groups.

This raises questions on the limits of the potential reprisals and whether they will reach the Egyptians in Libya or go beyond the Egyptian-Libyan border into Egypt’s internal scene.

It should be noted that the attacks that were carried out in the past two days do not indicate coordination between the perpetrators. The Sinai attacks are always conducted in the same way, and Ansar Bayt al-Maqdis, which pledged allegiance to the Islamic State (IS), often claims responsibility for them. As for the bomb in the metro station, it is a familiar attack that does not suggest that a real group is behind it. This is while the waterborne attack is totally new for the Egyptian arena, and may suggest that there are new terrorist groups operating in Egypt.

The only link between all of these attacks is the broad security crackdown by the state against armed groups in multiple places in Egypt, particularly in Sinai, on the western border, in Cairo, and a number of other provinces.

These terrorist attacks seem to be a reaction to the state’s security policy. At the same time, they raise the question of the effectiveness of the state’s mechanisms in the face of terrorism, and whether or not they need to be reviewed.

The Sinai attack in particular was carried out during unprecedented security measures, in which the Egyptian state has mobilized both the armed forces and public opinion, and through which it has taken several measures, most notably the evacuation of the border line with Gaza, and has used all of its tools to confront terrorism in the Egyptian peninsula.

In this context, Gen. Adel Suleiman, head of the Strategic Dialogue Forum told As-Safir, “The state is dealing with terrorist incidents with security tools alone, which is not enough. What is needed is a comprehensive vision to counter terrorism, taking into account the political, preaching, developmental and social dimensions, including caring for the people’s development needs in Sinai and to provide them with services and facilities to build a real support” in the war on terrorism.

Suleiman said, “The recent attacks cannot be linked to each other. For instance, the attack in Karam al-Kawadis, which resulted in dozens of soldiers being killed, was planned with great potentials, while the attack in the underground metro station was limited and may be individual.”

“There are terrorist incidents indicating the involvement of external forces and the presence of real groups and individual attacks. Yet, the overall situation suggests that there is a permanent attempt to create unrest and insecurity,” Suleiman said. “On the other hand, there is misconduct; security members in Sinai are targeted by terrorist groups and they know it. Yet, they are moving without sufficient caution, and the Egyptian state does not take the necessary precautions when transporting them on their way home.”

Suleiman said, “One could not predict the nature of the attack on the Mediterranean coast, nor the parties involved unless the sufficient information is available. The nationality of the detainees has not been announced, and any talk on the involvement of parties, such as Turkey in response to the rapprochement between Greece, Cyprus and Egypt, is unfounded.”

Regarding the bombing that targeted the Egyptian embassy in Tripoli, Suleiman said, “Any disturbance in a neighboring state affects Egypt’s security, not only in terms of the Egyptian interests in Libya or the Egyptians there, but also the Egyptian-Libyan border, which extends to more than a thousand kilometers. In all cases, there must be an integrated vision to counter terrorism, instead of contenting oneself with just security campaigns.”

The incidents that took place in the past two days show most importantly that the confrontation with violence is not ephemeral, and will not be resolved by a broad security crackdown no matter how strong it is, and that there is a need to re-examine the motives and reasons behind violence.

On the other hand, some argue that what the Egyptian state is doing is designed to find the optimal way to confront terrorism.

In this context, strategic expert Maj. Gen. Mohyi Nouh told As-Safir: “The attacks were the direct result of the successive blows dealt by the state to terrorist groups.

“For instance, the extreme pressure on terrorism in the Sinai may have pushed terrorists to work through the sea, and we can say that this is an important qualitative leap. Yet, one cannot underestimate the efforts carried out by the armed forces to combat terrorism,” he said. “The attacks are mainly designed to undermine the armed forces and what they are doing, and represent an attempt by terrorist groups to prove their existence, which is a sign of weakness, not of strength, proving the success of the crackdowns” carried out by the armed forces.

On the situation in Libya and to what extent it affects Egypt, Nouh said, “The authorities in Libya are making progress in terms of regaining control, and Gen. Hifter is dealing powerful blows to terrorism. Besides, the armed forces are tightening their grip on the western border, either through the aircraft, al-Saiqa special forces, paratroopers and other tools.”

He said, “I do not think that there is a great danger for the Egyptians in Libya, and in all cases, the best way to secure the Egyptians there is by restoring security and the state in Libya.” He expressed his optimism regarding the performance of the Egyptian armed forces, and anticipated that “the coming period will witness extended and deadly blows against terrorists in the Sinai and everywhere in Egypt.”

The Egyptian state is actually dealing powerful blows against terrorism on the internal scene, and cooperating seriously to combat terrorism abroad. Nevertheless, the experiment has proved that the crackdowns alone do not eliminate terrorism, but can lead to its spread and the creation of new cells.