You are here: Home / MidEastGulf / 82 ISIS militants, including senior learders, escape from Mosul 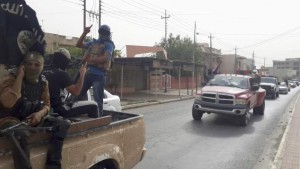 Media official of the Kurdistan Democratic Party in Mosul Saeed Mamouzini announced on Thursday the escape of 82 ISIS militants from Mosul into Syria, attributing the reason to the collapse of morale and splits in the ranks of the organization.

Mamouzini said in an interview for IraqiNews.com, “82 militants from ISIS fled during the last two days from the city of Mosul to Syria,” noting that “Among the escapees were three leaders belonging to ISIS.”

Mamouzini attributed the reasons for this to “the collapse of the morale among the militants in Mosul and splits in the organization in Mosul,” adding that “ISIS leader, Abu Bakr al-Baghdadi has recently arrived in Mosul from Syria in order to raise the morale of armed men.”