You are here: Home / Senza categoria / Baghdadi welcomes new pledges of IS allegiance 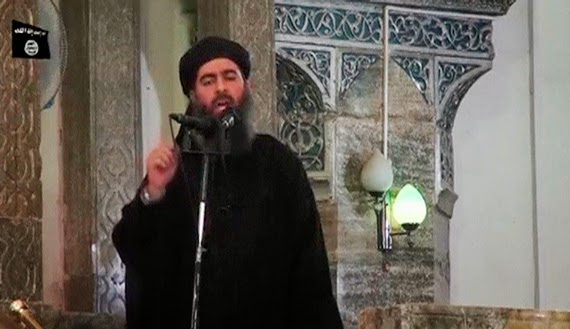 The head of the Islamic State (IS), Abu Bakr al-Baghdadi, vowed to inflame the region by declaring the formation of new IS provinces in several Arab countries, in addition to Iraq and the Levant, which would make him caliph over most Arab states. He called on militants to blow up “the volcanoes of jihad” the world over.
Although he acknowledged that the international alliance’s operations against IS were violent, he described them as weak, impotent and failing. He foreshadowed an imminent land confrontation with the “Crusaders” [the anti-IS alliance], and he threatened the rulers of Saudi Arabia, saying that they “will not know rest from now on.”

Baghdadi’s words were part of an audio recording titled, “Despite the Disbelievers’ Hate” (Law Kariha l Kafiroun), and it was issued on Thursday [Nov. 13] by al-Furqan Association, which is IS’ central media arm.

The recording came to prove the news wrong only a few days after media reports of his possible death by a US airstrike. Baghdadi talked about events that took place after the news of his death spread, like the collective “pledges of allegiance” he got from Egypt, Libya, Yemen and Saudi Arabia. He also commented on Washington plans on sending a new group of soldiers to Iraq.

As-Safir had cited a source close to IS in a report published last Wednesday [Nov. 5], saying that the collective “pledges of allegiance happened in coordination with the organization’s command,” and that they were paving the way for a step that was being planned to face the “American deceit.” The source did not rule out a possible audio recording for one of the IS leaders in the next few days.

Baghdadi’s speech was divided into two main parts. The first one took around two-thirds of the time of the recording and lasted 17 minutes. Baghdadi tackled the failure of the international alliance’s operations, which he called “Crusade campaign,” and he mocked the Arab participation in them. In the second part, which was the most dangerous, he announced that IS is expanding and new provinces are rising in several Arab countries. Both parts were under Baghdadi’s main headline, which stated that jihad would persist and would target all people and lands at all times.

Baghdadi began, “God has commanded all people without exception to be jihadists. He ordered us to fight until the last man.” Baghdadi wanted to assert that his soldiers “will never leave the fight” and that they are “divinely aided.”

Then, he talked elaborately about the Crusade campaign against him. Although he acknowledged that this campaign carried out by the international alliance was one of “the fiercest and most intense,” he described it as “a failure and disappointment.” He said that the United States and its alliance were “stumbling in fear, weakness, impotence and failure.”

He believed that the United States and Western states were afraid, and the first indicator was that they “did not dare start their campaign before gathering their slaves and dogs of Muslim rulers.” He mocked the participation of Arab states in this alliance, which he described as a “media act.” Another indicator of their fear is “the participation of the Jews (Zionist entity) in this campaign, secretly and stealthily.”

Baghdadi seemed to respond to US President Barack Obama when he reiterated almost verbatim the provisions of Obama’s strategy for the war against IS, including shelling locations, stopping IS advancement, arming and recruiting soldiers and regaining cities. Baghdadi said that this strategy failed. He said, “Despite the air raids and continuous shelling, IS advancement did not stop.” With his statement, Baghdadi hit a nerve, as Obama was also being criticized by his Republican opponents and some strategic analysts.

In his past speech, Baghdadi expected Washington to wage the battle against him after discovering that “its advocates that are fighting a war by proxy won’t be useful.” In yesterday’s speech, Baghdadi said that Washington “will be obliged to put boots on the ground.” Baghdadi said Obama’s decision to send 1,500 new soldiers to Iraq constituted a start to that plan.

It was not enough for Baghdadi to declare the failure and impotence of the US plan to deter IS; he went as far as threatening to enflame the region “and erupt the jihad volcanoes everywhere and set fire to the earth with its tyrants.” He announced the largest expansion of his organization since its establishment by accepting the recent collective “pledges of allegiance” from factions scattered in several Arab countries, mainly Ansar Bayt al-Maqdis in Sinai, Egypt. The other pledges are also important, especially those declared in Saudi Arabia.

“We announce to you the expansion of the Islamic State to new countries, to the countries of the Haramayn [Saudi Arabia], Yemen, Egypt, Libya and Algeria,” Baghdadi said. It is noteworthy that the collective pledges of allegiance came from these countries last Monday [Nov. 10]. Baghdadi declared accepting them and specified the procedures that follow this acceptance, like canceling the names of the groups, declaring them new provinces under IS and appointing “walis” for them. This means that IS has expanded its provinces to seven Arab countries.

It was remarkable that Baghdadi specifically threatened Saudi Arabia, which he called “Bilad al-Haramayn” (the country of the custodian mosques), with an elevated tone. He called its rulers “the Saloul family, the serpent’s head and the stronghold of the disease.”

He called on his advocates to draw their swords, because “there shall be no rest or security for the Salouls and their soldiers from now on.”

In a statement that asserted the interest of IS in deepening the strife and manipulating it, Baghdadi urged his advocates in Saudi Arabia to start fighting the rawafid (rejectors of Islamic authority, in their opinion), then al-Saud family and its soldiers before reaching the Crusaders and their bases.

Perhaps the most dangerous element in Baghdadi’s speech was his noting that the vanguards of the state would soon be sent to meet their backers in Saudi Arabia.

“Chop them to pieces, make their lives a living hell, and God willing, soon the vanguards of IS will arrive,” he said.

Baghdadi also called on the soldiers of Yemen to attack Houthis, whom he described as infidels, and he called on the “Unification Lions” (an expression used by Baghdadi to describe those seeking to unify the Islamic nation) in Libya, Algeria, Tunisia and Morocco not to hand over the country to seculars. He also praised Sinai inhabitants for starting jihad against what he called the “dictators of Egypt.”

The expansion declaration is a clear threat to the mentioned countries, which are on the chaotic agenda that IS has in store for the region. But at the same time, this declaration constitutes a huge challenge for the organization and its leader, Baghdadi. How far can he keep the commitments that accepting the pledges of allegiance and expanding to five countries at the same time entail, and can he bear the subsequent financial, organizational and military burdens?