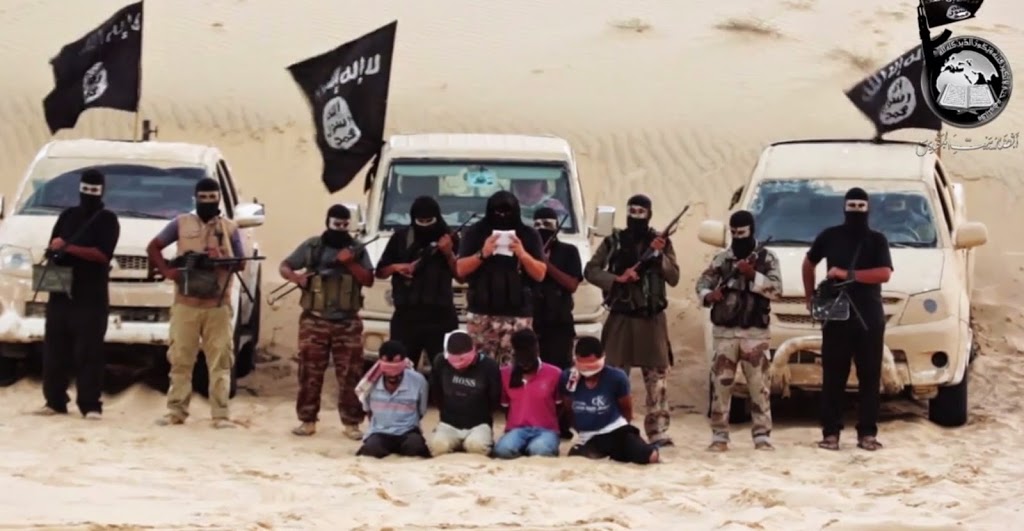 Instability in the Sinai Peninsula turned into a more dangerous situation after the terrorist group Ansar Bayt al-Maqdis pledged allegiance to the Islamic State (IS) on Nov. 10.
Although Al-Monitor has previously reported on the link between the two groups, this official pledge creates challenges for the Egyptian government, which has periodically been declaring its progress in eradicating terrorism in Sinai.

A Sinai tribal sheikh close to the armed forces intelligence services in al-Arish, the largest city in North Sinai, told Al-Monitor on condition of anonymity that one of the main challenges currently faced by the government, and one that is preoccupying the president personally, is that thousands of Egyptians are losing faith in the information regularly published by the army on the progress of the war on terrorism in Sinai.

“This problem got worse after Ansar Bayt al-Maqdis posted a video showing the group attacking the military base of Karam al-Kawadis on Oct. 24, south of Sheikh Zuweid, which claimed the lives of 32 Egyptian army members and wounded about a dozen others,” the sheikh said.

“The video caused anger at the Army General Command as it showed disastrous details, especially that the military unit, equipped with advanced combat equipment, did not confront the terrorists and didn’t even fire a single shot, not to mention that a tank withdrew in the middle of the battle,” he said.

A researcher in security affairs and jihadist groups in Sinai, which requested anonymity for security reasons, told Al-Monitor, “The timing of Ansar Bayt al-Maqdis’ decision to pledge allegiance to IS is fatal in light of Sisi’s until now successful attempts to convince the United States and Israel of his progress in eliminating the group.

The progress is in terms of elimination of the threat to Israel’s security, by establishing a buffer zone in Rafah, in exchange for the United States and the international community turning a blind eye on the violation of freedoms and human rights and the practices of his repressive regime.”

The researcher said the video of Karam al-Kawadis confirms that the battle in Sinai is becoming highly complicated. The reality showed that there were small groups of terrorists working hard together and moving according to precalculated steps with great confidence and planning that must not be underestimated.

“The confidence of Ansar Bayt al-Maqdis, which appears in the video, stems from the high familiarity of its fighters with the rugged Sinai landscape. This is in addition to their experience, reflected in their on-target operations. In the meantime, the army is busy torturing civilians and disseminating false information and data to the public about exaggerated operations targeting Ansar Bayt al-Maqdis and its leaders,” the researcher said.

“The evidence for this is the appearance of two prominent figures from the organization in the execution of the Kawadis attack: Abu Osama al-Masri, a spokesman for Ansar Bayt al-Maqdis and field leader Shadi al-Menei, who have already been declared dead more than once in previous campaigns,” the researcher said.

“The plan to surprise the army unit was highly developed. Ansar Bayt al-Maqdis started by penetrating the army position with a truck loaded with more than two tons of highly explosive TNT to kill some of the soldiers in the vicinity with a huge explosion. This aimed at creating imbalance and shock among the survivors who saw the violent explosion. Then they attacked with infantry forces equipped with various arms,” the researcher added.

The researcher said defeating terrorists in Sinai required “forces knowledgeable of the landscape of the place, trained in guerrilla tactics and, most important, on combat elements.” He said, “The problem is not in armament, since the military unit had two US-made M-60 tanks, which have highly protective armor against [many of the] existing weapons in Sinai, in addition to two armored half-tracks [vehicles] and a significant number of rockets and mortar systems as well as heavy weapons. These weapons fell in the hands of Ansar Bayt al-Maqdis, which will be used against them in the future, as the battles intensify.”

A source sympathetic to the jihadists in the border region, who preferred to remain anonymous, told Al-Monitor, “The announcement of Ansar Bayt al-Maqdis to officially join IS was the result of attractive offers of supplies and weapons from [IS leader Abu Bakr] al-Baghdadi. These will be given in return for Ansar Bayt al-Maqdis expanding its attacks on Egypt. This allegiance also aims to boost the morale of the fighters as it reflects their spread into neighboring countries and confirms that they are not affected by the violent coalition strikes.”

He said Ansar Bayt al-Maqdis accepted the offer after the Egyptian army in past months aggressively targeted the group’s weapons depots and dried up its trade sources in Sinai.

The pro-jihadist source continued, “The attack on the Karam al-Kawadis military site had been planned for a full month and the condition was that the attack would be filmed in a way that affects public opinion, in particular to attract angry youths from other Egyptian governorates to use them in bomb attacks.”

The source warned of drastic changes in the combat mechanisms of Ansar Bayt al-Maqdis after joining IS, especially in terms of expanding unexpected bomb attacks against civilians in the capitals of Sinai and the region’s security headquarters, as well as in the heart of Egyptian provinces outside Sinai.

The risk of IS reaching Sinai comes as Israel tightens security measures on its side of the border, including the deployment of additional forces, according to Salmi Tarabin, a resident of the Egyptian Sinai border area.
Tarabin confirmed that Israeli reconnaissance drones have entered Egyptian territory to prevent any danger that might threaten it.

Massaad Abu Fajr, member of the 50-member committee charged with writing the new constitution, commented on his Facebook account about the pledge of allegiance by Ansar Bayt al-Maqdis to IS. He said, “The war against Ansar Bayt al-Maqdis would not last for two weeks if there was a rational state.

Today, the only hope is that the government stops killing hundreds of civilians, imprisoning thousands of innocent people and blowing up their homes. It must return the army to its barracks and replace its troops with forces specialized in fighting terrorism operating under the [rule of] law.”

He said if this did not happen, there would be more violence and no victory for Sinai.