You are here: Home / Senza categoria / Libya: the eastern town of Derna is emerging as a new Islamic State stronghold 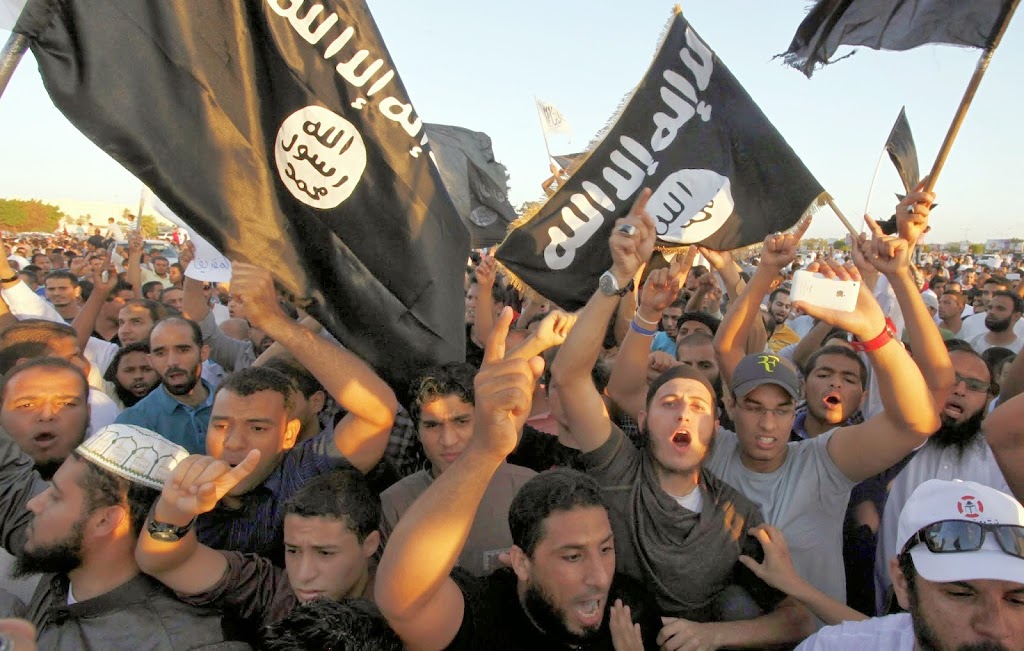 With Libya engulfed in chaos, the town of Derna in the east of the country is emerging as a new stronghold for the Islamic State group, experts say.

The North African state has been wracked by instability since the overthrow of leader Muammar Gaddafi in 2011, providing a fertile ground for extremists.

IS fighters have already swept across Iraq and Syria, and their leader Abu Bakr al-Baghdadi recently boasted of vows of allegiance from militants in Libya, Egypt, Algeria, Yemen and Saudi Arabia.

Some Western observers consider Derna, a town of 150,000, to be the home of a third IS franchise in North Africa, after Jund al-Khilifa in Algeria and Egypt’s Ansar Beit al-Maqdis declared their support earlier this year.

“The Islamic State is in Derna. It’s well documented. There’s no doubt,” said Othman Ben Sassi, a former member of the now-disbanded Transitional National Council, the political arm of the rebellion that overthrew Gaddafi. The group is exploiting “the absence of state authority and porous borders,” he added.

Statements and images have for several weeks circulated on extremist forums claiming to depict gatherings of “Libyan jihadists” belonging to IS – prompting concern in Washington.

“We have seen reports that violent extremists (in Libya) have pledged allegiance to IS and are looking to associate themselves with it,” said State Department spokesman Jeffrey Rathke.

Libyan authorities have struggled to control militant groups as well as powerful militias which ousted Gaddafi, and the internationally recognised government has been forced to take refuge in the far east of the oil-rich country.

‘IDEOLOGICAL FIGHT’
Derna and large areas of Benghazi, Libya’s second city, have served as strongholds for radical groups including Ansar al-Sharia, classed by the UN as a terrorist organisation.

In April, an offshoot of the group announced it had implemented Islamic sharia law in Derna. The self-proclaimed “Shura Council of Islamic Youth” has reportedly opened Islamic courts and established a religious police force in the town.

Dozens of masked members have appeared in military fatigues, regularly parading in pick-up trucks brandishing rocket launchers and heavy machine guns, and toting the black and white flag used by militants.
In August the Shura Council posted a video online appearing to show the public execution in a Derna football stadium of an Egyptian man accused of murder.

But the group has yet to formally pledge allegiance to IS, and analysts say there are divisions within its ranks.
“Several extremists in Derna are attracted to IS. But the majority of senior jihadists in Libya are former Al-Qaeda members and there is an ideological fight between IS and Al-Qaeda partisans,” said a Libyan expert on militants who did not want to be named.

The UN this month branded Ansar al-Sharia a terrorist organisation owing to its affiliation with Al-Qaeda’s North African franchise. “The decision was based on reliable intelligence,” the Libyan expert said. “Ansar al-Sharia has closer ties to Al-Qaeda than to any other group.”

‘ISLAMIC EMIRATE’
According to Claudia Gazzini, Libya analyst at International Crisis Group, some Derna factions have pledged allegiance to IS, but it is unclear which ones and how much support they enjoy.

“There is a misguided tendency to automatically associate the establishment of Islamic courts and the killings of soldiers with an IS agenda,” she said.

Derna was already considered by many analysts to be a de-facto “Islamic emirate”, entirely free from state control, before the reported claims of allegiance to IS. The town has long been suspected of harbouring and training foreign fighters who then go on to fight in Iraq and Syria, where IS has declared a “caliphate” and imposed its harsh interpretation of Islamic law.

“There are factions in Derna who reportedly swore allegiance to IS in the search for a group that could unify the Muslim community,” said a former Libyan official who also asked not to be named for security reasons.
“But ideological differences between jihadist groups and the international coalition offensive against IS means these factions have so far opted for discretion, or have gone to fight in Iraq and Syria,” the former official added.

According to one resident of Derna, life in the town goes on largely as normal – for most people.
“You go out, you do your chores, you visit friends. No one bothers you,” the resident said. “But if you are a policeman, a soldier or a lawyer, you’re dead.”