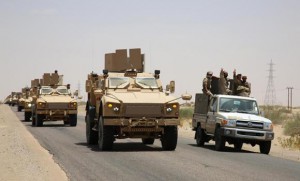 As many as 800 Egyptian soldiers arrived in Yemen late on Tuesday, Egyptian security sources said, swelling the ranks of a Gulf Arab military contingent which aims to rout the Iran-allied Houthi group after a five-month civil war.
It was the first reported deployment of ground troops there by Egypt, which has one of the Arab world’s strongest armies.
A coalition led by Saudi Arabia has scored major gains against the militia and its allies in Yemen’s army, backing a push by Yemeni fighters to seize much of the country’s south and now setting its sights on the Houthi-controlled capital Sanaa.
Four Egyptian units of between 150 to 200 troops along with tanks and transport vehicles arrived in Yemen late on Tuesday, two Egyptian security sources said.
“We have sent these forces as part of Egypt’s prominent role in this alliance … the alliance fights for the sake of our brotherly Arab states, and the death of any Egyptian soldier would be an honour and considered martyrdom for the sake of innocent people,” a senior Egyptian military source said.
Yemeni officials put the number of foreign troops from Saudi Arabia, the United Arab Emirates and Qatar at least around 2,000, while Qatari-owned Al Jazeera TV said at least 10,000 foreign soldiers had arrived, including 1,000 from the emirate.
They are part of a force preparing to eventually assault the capital, which the Houthis seized last year.
The alliance sees the campaign as a fight against the influence of arch-rival Iran in their neighbourhood, but the Houthis say they are fighting a revolution against a corrupt government, which they drove into Saudi exile in late March.
More than 4,500 people have been killed by fighting and air strikes since the beginning of the conflict, which has also unleashed disease and hunger in the impoverished country.
Brigadier General Ahmed al-Asseri, a spokesman for the coalition, told Reuters its forces were focusing on overcoming Houthi resistance in Yemen’s central and southern provinces, pounding their positions from the air across the country before beginning any thrust towards Sanaa.
“Before you start the ground operation, you have to have the prerequisite of the air campaign,” al-Asseri said.
“I don’t want to talk about Sanaa because the military issue is in phases … Now we are talking of Marib and Taiz.”
Residents reported heavy air raids on military bases throughout Sanaa on Wednesday, the latest in a series of daily assaults which fishermen said killed 20 Indian nationals off a Red Sea port on Tuesday. At least 15 other civilians were killed throughout the country on Tuesday, medics said.
The alliance has increased air strikes on Sanaa and other parts of Yemen since Friday, when a Houthi missile attack killed at least 60 Saudi, Bahraini and United Arab Emirates soldiers at a military camp in central Marib province.