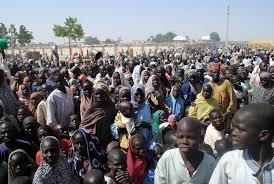 A total of 800 hostages in Boko Haram’s custody have been freed in a military operation by Nigerian troop in the restive northeast state of Borno, the Army said Thursday.

Lucky Irabor, Theater Commander of Operation Lafiya Dole, told a news conference in Maiduguri, the state capital, that they were rescued in its ongoing anti-terrorism operations.

He said that the persons had been rescued since Nov. 23.

Irabor said the military had also arrested a number of terrorists fleeing their Sambisa forest hideout due to the ongoing operation.

The arrested have been handed over to the Nigeria Police, he added.

On Sunday, the Chief of Army Staff, Tukur Buratai, called on troops serving in the northeast to immediately embark on the final aggressive action and comprehensive sweep of the operational theater to end the operation against the Boko Haram insurgents.

Nigeria’s northeast region has been a stronghold of the extremist group Boko Haram. Over the past months, the Nigerian government has launched several military operations to eliminate the terror group.