You are here: Home / West Asia / 80 Taliban ‘killed in MoD operations’ across Afghanistan 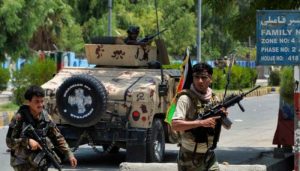 The Ministry of Defense says 80 Taliban fighters have been killed across the country in the past 24 hours, like reported by khaama.com.

The Ministry of Defenses said in a statement on Monday, that 80 insurgents were killed, 36 wounded and a large number of weapons and ammunition were destroyed during the clashes and operations conducted by the Afghan defense forces.

According to MOD, the Taliban fighters were killed and wounded in Kandahar, Nangarhar, Badghis, Ghor, Takhar, Baghlan, and Helmand provinces.

During the security operations, 123 Taliban planted and placed mines in different parts of the country were discovered and neutralized Afghan national defense and security forces.

Three Taliban strongholds were reportedly destroyed and wrecked, besides two anti-vehicle mines and some weapons and ammunition of the group were seized by the Afghan special forces unit of commandos.