You are here: Home / Analysis / 8 principles of Iran’s foreign policy towards the Nagorno-Karabakh war 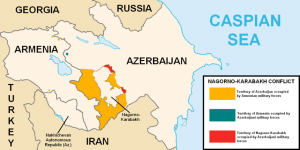 Apart from the ancient and long-lasting historical, religious and lingual ties between Iran and the Caucasus, there are 800 kilometers of border lines that connect Iran to this region. The Iranian provinces of Ardabil and Eastern Azarbaijan have 369 kilometers and 200 kilometers of joint borders with the Republic of Azerbaijan respectively. Eastern Azarbaijan is the only Iranian province that shares borders with Armenia. This border line is 35 kilometers long. Iran is also the only country adjacent to the disputed region of Karabakh, like reported by valdaiclub.com.

None of Georgia, Russia and Turkey are in such close proximity to these disputes. The Iranian village of Khoda Afarin, located on the Eastern Azarbaijan-Armenia border, has been hit by the artilleries of the conflicting parties several times. The sound of the bullets, shells and missiles fired by the Armenian and Azerbaijani armed forces are heard in other Iranian villages close to the northwestern border. This puts Iran in a sensitive situation so that tension and war in Karabakh region and its surrounding areas directly impacts the security of Iran’s northwestern borders.

In addition to the security and border-related considerations, Iran is in a very different position compared with Georgia, Russia and Turkey. The presence of millions of Azeris in the northwestern provinces of Iran who are sensitive to the position of the Republic of Azerbaijan in the Karabakh issue as well as presence of a hundred thousand of Armenians in Iran who sympathize with Armenia has made the Karabakh dispute outstanding for Iran from an ethnical perspective. The other dimension is the religious considerations that the Shia seminaries particularly in the cities of Qom and Mashhad inside Iran and Najaf in Iraq have about supporting the Shia Muslims of the Republic of Azerbaijan and expect the Iranian government to support the Republic of Azerbaijan in the Karabakh dispute more actively. It is also noteworthy that there is a close tie between the two religious and ethnic considerations in many parts of Northwestern Iran with an Azeri majority population. In the meantime, some pan-Azeri and Pan-Turkish currents activate the religious and ethnical sentiments in these Azeri settling areas of Iran. In many occasions they disseminate false news about Iranian government’s position vis-à-vis the Karabakh dispute. However, when it comes to the position of Iran’s government on the Karabakh issue in the past three decades, eight principles can be referred to which can clear up many probable ambiguities:

1. Recognizing the government of Azerbaijan’s right to sovereignty over the Karabakh region and the seven regions around it

From the beginning of the Karabakh crisis in early 1990s, the Iranian government has recognized the region of Karabakh and regions around it as part of the Republic of Azerbaijan. This position has never changed during the previous three decades. Basically, Iran’s opposition to the ethnic dynamics and secessionism is one of the fundamental factors in Iran’s foreign policy in the South Caucasus. Iranian society is comprised of various ethnic groups and therefore, Iran opposes any ethnic-political dynamic that is separatist. In this framework, Iran never recognized the independence of Karabakh, Abkhazia and South Ossetia in spite of good and close relations between Iran and Armenia and also Iran and the Russian Federation. In the past decades, this Iranian approach to ethnic dynamics and separatism has been persistent and is observed in Chechnya, Dagestan in North Caucasus and in Iraqi Kurdistan.

2. Non-recognition of the Republic of Artsakh and other political developments in the Karabakh region

In line with the abovementioned principle, Iran has not recognized any of the internal political developments in the region of Karabakh including the existence of Artsakh Republic and the results of the referendums and elections held in this region by the Armenians. Tehran has rejected all of them as invalid and believes that any political transformation in this region should be after the resolution of the dispute and conclusion of a peace treaty that is consented by all conflicting parties namely the government of Armenia, the Karabakh region and the government of Azerbaijan.

3. The balanced approach and maintenance of relations with both Armenia and the Republic of Azerbaijan

Iran has fifteen neighbors. This number is only comparable to such countries as China and Russia. Iran’s principal policy is maintenance of good relations with all its neighbors and therefore it has never initiated severing its relations with any of its neighbors. In this framework, from early 1990s Iran has asked for a balanced approach and maintenance of relations with both governments of Armenia and the Republic of Azarbaijan. Therefore, Iran’s position on the Nagorno-Karabakh conflict is different from that of Turkey, Kingdom of Saudi Arabia, Yemen and Pakistan who have either cut their relations with Armenia or have not recognized it as an independent country. Fred Holliday calls this approach “bunch of flowers policy”. Svante Cornell describes it as the “disinterested player” and for Shirin Hunter it is “pragmatism”.

Regardless of what this policy is named, it has been in accordance to this policy that Iran has provided humanitarian and financial assistances to both Armenia and Azerbaijan from early 1990s. Contrary to some allegations by the pan-Azeri and pan-Turkish allegations, Iran provided the people of Azerbaijan, particularly, the residents of Nakhchivan with gas, electricity and basic goods from early 1990s and hosted thousands of Azerbaijanis displaced by war. Such actions of Iran are mentioned in the memoirs of Abulfaz Elchibey, Heydar Aliyev and also Hashemi Rafsanjani. Add to this the point that the balanced approach and the neighborhood policy of Iran in south Caucasus does not only apply to Armenia and the Republic of Azerbaijan but also includes Georgia. From this perspective, Iran enjoys a special and outstanding place in South Caucasus, as it is only Iran among the three neighbors of the region that has sustainable diplomatic relations with all three countries of the South Caucasus including Armenia and Georgia as the two Christian countries and Republic of Azerbaijan as the Muslim and Shia country. As a matter of fact, there are no political relations between Armenia and Turkey from 1993 to the present time. Russia and Georgia have also cut their relations since 2008. This grants Iran a unique place in South Caucasus.

4. Opposing the war and using force to resolve the Karabakh crisis

In line with the balanced approach and its neighborhood policy based on maintenance of relations with both governments of Armenia and the Republic of Azerbaijan, which was explained under the previous heading, Iran is against any war and application of force to resolve the Karabakh crisis by the Armenian and Azeri parties. As was mentioned in the beginning of this piece, unlike Georgia, Russia and Turkey, Iran is adjacent to the disputed region of Karabakh and therefore any military encounter in this region can easily threaten the security of northwestern border areas of Iran in the two provinces of East Azerbaijan and Ardabil and instigate the ethnic and religious sentiments of millions of people inside Iran. Following such approach, Iran actively entered a process of mediation between Armenian and Azeri parties in 1990s and has supported any initiation for ceasefire and peace building that is agreed by both parties. For this reason, in the clashes of the past few years including the four days wars of April 2016 and July 2020 and also the recent clash starting from September 27, 2020 the Iranian high-ranking officials have immediately called for ceasefire between the two parties in the Karabakh dispute because continuation of the war and clashes close to Iran’s border is a serious threat to the national interests and security of Iran.

5. Maintaining the rights and security of the Armenians of Karabakh in the Karabakh peace plans

Iran’s approach to the Karabakh conflict is not a one-sided one. For Tehran, the rights and security of the Armenians of Karabakh is also important and should be respected. In any peace plan and in the case of any development including the return of Azeri war refugees from the Republic of Azerbaijan to the Karabakh region and the seven regions around it or any other political and legal development such as a referendum, the right to self-determination of the Armenians of Karabakh should be respected. From the Iranian perspective, overlooking this could lead to resumption of conflict between Armenians and Azeris which could in turn trigger a war or conflict in the region and ruin any peace plan in the Karabakh region.

6. Opposing the interference of trans-regional powers in resolution of the Karabakh crisis

In line with its foreign and defense policy, Iran is opposed to any interference of trans-regional powers such as United States and NATO in the resolution of the Karabakh crisis. Similar to other crises in the region including those in Afghanistan, Iraq, Yemen and Syria, Iran believes that the Karabakh crisis should also be resolved with the political will of the two countries of Armenia and Azerbaijan. The neighboring countries like Georgia, Russia, Turley and Iran can join this process in various forms if Yerevan and Baku ask for it.

7. Opposing the stationing of international peacekeeping forces in the Karabakh contact lines along the Iranian border

In line with the principle of opposing the interference of the trans-regional powers in the resolution of the Karabakh crisis, Iran is also opposed to stationing of international peace keeping forces particularly if they include trans-regional forces in the contact lines of Karabakh close to Iran’s border. Instead, Iran supports indigenous and regional mechanisms for maintenance of ceasefire and peace in Karabakh as well as provision of security to its residents both Armenian and Azeri.

8. Mediating the process of peace and dispute resolution upon the request from the governments of Azerbaijan and Armenia

In early 1990s the Iranian government actively embarked on mediation between Azerbaijan and Armenia upon their request. This resulted in a peace agreement between Yagub Mammadov (the acting president of Azerbaijan and Levon Ter-Petrosyan, the then president of Armenia mediated by Iranian president of the time Hashemi Rafsanjani in May 1992. Unfortunately, due to some conditions including the occupation of the city of Shusha by Armenians in May 8, 1992 (only one day after conclusion of the Tehran agreement) this mediation failed. Here, Iran could not repeat the successful experience of mediating in the Tajikistan civil war which culminated in the signing of the peace agreement between the government of Tajikistan and the Islamic Renaissance Party (IRPT) in 1997. In this case, the Russian Federation was also involved. Despite this unsuccessful experience and despite excluding Iran from the Minsk Group of the Organization for Security and Cooperation in Europe, the government of Iran has supported any mediation and initiation for ceasefire and peace between Armenia and the Republic of Azerbaijan on the issue of Karabakh and has always insisted that Iran’s involvement in such initiatives is contingent upon the willingness and request of the leaders of Armenia and the Republic of Azerbaijan.

In light of the eight mentioned principles, Iran has anxiously followed up the clashes between Armenia and the Republic of Azerbaijan, started from September 27, 2020 which unlike the two previous four days wars of April 2016 and July 2020 are serious breach of the ceasefire from 1994 to date. The recent clashes in Karabakh have been outstanding in terms of the expansion and volume of the conflict, human and financial losses, the level of preparedness, the curfew and the general mobilization inside Armenia and Azerbaijan and also the all-out political and military support of the Turkish government and army from the Republic of Azerbaijan. These have added to Iran’s concerns about the conditions of the region. Iran’s demand in the current situation is a quick ceasefire by the two parties to prevent more human and financial losses and to curb the intensification of the conflict into an all-out war in the Caucasus that would make the conditions uncontrollable with all the three countries in the Caucasus (Armenia, the Republic of Azerbaijan and Georgia) and the three neighboring countries of Iran, Russia and Turkey the losers.