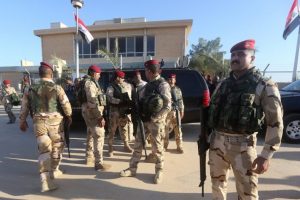 Paramilitary troops repelled an attack by Islamic State on a border area between Iraq and Syria, a source with the Popular Mobilization Forces was quoted as saying, like reported by iraqinews.com.

“The attack, which lasted for several hours, left two armored vehicles of Islamic State destroyed as well,” the source said.

Last week, the paramilitary troops announced repelling an IS attack at Tall Sufuk border crossing, killing eighteen suicide attackers. On the same day, Spokesman for the Interior Ministry Brigadier General Saad Maan said 15 militants were killed on the border between Iraq and Syria in an operation that was launched after tracking down the Islamic State cell for a few days.

Thousands of IS militants as well as Iraqi civilians were killed since the government campaign, backed by paramilitary troops and a U.S.-led international coalition, was launched in October 2016 to fight the militant group.

Since then, forces took back the group’s former capital, Mosul, the town of Tal Afar, Kirkuk’s Hawija, and each of Annah, Rawa and Qaim in Anbar.