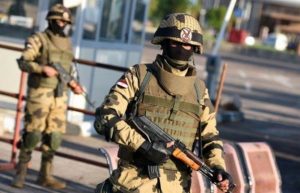 Egypt’s army said Tuesday eight militants and two soldiers had been killed amid ongoing security operations in the Sinai peninsula, like reported by arabnews.com.

Egyptian forces launched operation “Sinai 2018” in February in the peninsula where soldiers and security forces have been battling the Daesh group.

A military statement said eight militants were killed “in recent days” in clashes with security personnel, who were combing the area for suspected jihadist hideouts.

More than 200 militants and at least 35 soldiers have been killed since the military launched the operation, according to official figures.

On a visit to the Sinai last month, President Abdel Fattah El-Sisi — re-elected in March with 97 percent of the vote — promised residents the operation would be finished “as soon as possible.”

The army said it had also arrested and prosecuted “64 wanted individuals and suspects.”

Journalists and NGOs are not allowed to enter areas of operations.

Last week, an Egyptian military court sentenced Ismail Alexandrani, a prominent journalist and expert on jihadist movements in the Sinai peninsula, to 10 years in prison.

The court accused Alexandrani of publishing military secrets and belonging to the banned Muslim Brotherhood, according to his lawyer.