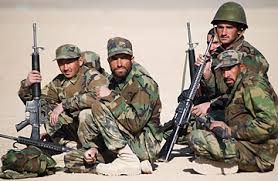 A senior border police commander in the east of the country told BNA, 8 members of Daesh terrorist group were killed at the end of the clashes.