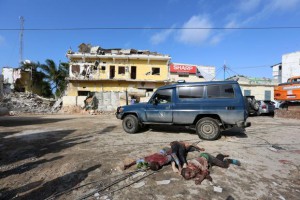 “The joint forces killed 8 Al-Shabaab fighters and recovered grenades including an artillery gun which they were using. Our forces are still in the area,” SNA Commander in the region, Ahmed Mohamed, told reporters.

However, Al-Shabaab militants later claimed to have captured Bud-bud area from Ethiopian troops which are part of the AU and Somali forces, a claim which the government denied.