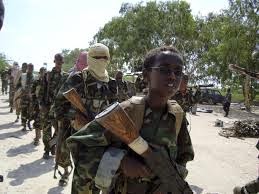 In the small hours of December 2nd gunmen snuck up on a group of sleeping quarry workers in Mandera country, close to Kenya’s border with Somalia. They were rounded up and made to lie face-down on the ground. Thirty-four of the men, who make a pitiful living mining and breaking stones, were executed with a bullet to the head; two were beheaded; all were non-Muslims.

Ten days earlier in the same remote part of Kenya gunmen flagged down an early-morning bus. Each passenger was asked to recite a verse from the Koran and to respond to a Muslim greeting. Those who failed were shot in the head. Twenty-eight people, many of them teachers going home for the Christmas holidays, were killed.

The Shabab, the militant Somali group affiliated with al-Qaeda, which is strengthening its foothold in Kenya, said it carried out both massacres.

The attacks underscore Kenya’s state of dire insecurity and inability to come to grips with the Shabab, either in the countryside or in key cities. The militant group had already struck the capital in an assault on the Westgate Mall in which at least 67 people were killed in September 2013.

But this was merely the most prominent of at least 136 terror attacks that have taken place since 2011, when Kenyan soldiers were sent into Somalia to help push back the Shabab. Most have been small-scale: a grenade tossed at a bus stop or a volley of bullets fired into a church, but the group’s ability to mount more complex attacks seems to be improving.

The Shabab’s focus has shifted somewhat from Somalia, where it has lost control of towns to Kenyan and other forces operating under an African Union banner and where key leaders have been killed in American air or drone strikes. In Kenya it is seeking to drive a wedge between already divided Christian and Muslim communities.

At Westgate the four gunmen made patchy efforts to separate Muslims and non-Muslims, and in the end killed many of both. It was a blow at the heart of the Kenyan state. Members of the elite, including a nephew of President Kenyatta, were massacred in a mall that symbolised Kenya’s growing wealth. By contrast the killings in Mandera and Mpeketoni, where at least 60 people were killed in June, probed at the poor and neglected edges of the country.

Nigeria, at the other end of Africa, offers a case-study in what happens when the persistent low-level ravages of an Islamic insurgency are ignored. Boko Haram’s attacks there have brought the legitimacy of the state into question. The Shabab’s recent actions betray similar tactics.

Since Kenya’s independence some 60 years ago, mostly-Christian communities in the north have jealously held power and money. Generations of neglect and marginalisation of Kenya’s Muslim and Somali communities, combined with the easy cross-border flow of extremists and deepening domestic inequality, have created a reservoir of angry, excluded young men ripe for recruitment by jihadists.

Kenya’s capacity for catastrophic inter-communal strife was borne out in the wake of the 2007 elections, when more than 1,100 people were killed in politically-motivated tribal violence. Now the Shabab is trying to prise apart another of Kenya’s fault lines.

The primary vehicle for extremism in Kenya is al-Hijra, an affiliate of the Shabab whose leader, Sheikh Ahmed Iman Ali, lives in Somalia. According to Matt Bryden, director of Sahan Research, a Nairobi-based think-tank. “Al-Hijra has been slowly but steadily growing in strength and capability, and increasingly represents a domestic threat in its own right.”

Moreover the state appears to be exacerbating the problem with heavy-handed tactics. In the days before the Mandera bus attack Kenyan police raided a series of mosques in the coastal town of Mombasa. About 200 people were arrested and four mosques were shut down. Police displayed hand grenades, pistols and knives they said were seized inside the mosques.

The local response was outrage from Muslim community leaders and human rights activists, and then an angry rampage by Muslim youth in which three people were stabbed to death.

The subsequent bus attack, claimed a spokesman for the Shabab, was an act of revenge for the mosque raids. He also reiterated a demand that Kenya withdraw its troops from Somalia, where 3,700 soldiers serve, and promised more attacks. “This is a war between Muslims and non-believers,” he declared.

The group’s former “emir”, Ahmed Godane, had made a similar ateempt to stir sectarianism in Kenya with one of his last audio messages before being killed in an American air strike in September. Godane addressed Kenyan security operations in which ethnic Somalis were rounded up and deported, presenting the Shabab as defenders of both the faith and the people. The killings in Mandera indicate that new leader, Ahmed Umar Abu Ubaidah, is sticking to Godane’s strategy.

The vengeful tit-for-tat of this fitful war is set to continue. Within hours of the Mandera bus attack Kenya’s army said it had pursued and killed the attackers. It then launched retaliatory air strikes on suspected Shabab camps across the border. Hours after the quarry massacre President Uhuru Kenyatta said that “we will not flinch in this war against terrorists” and replaced his embattled interior minister and police chief.

A military response is expected but Kenyans are wondering why their government and security forces always seem to be a step behind.