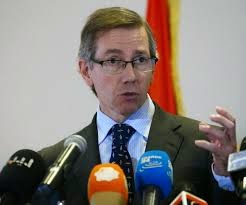 The UN’s mission in Libya will call for a new round of talks to start on Tuesday between Libya’s warring parties, it said in a statement on Wednesday, to try to end a conflict threatening to tear apart the oil-producing nation.

Libya has two governments and parliaments vying for power since a group called Libya Dawn seized the capital Tripoli in August after a month-long battle with a rival group and set up its own cabinet.
Internationally recognised Prime Minister Abdullah Al Thinni has been forced to work from the east of the country where the elected House of Representatives is also based.
The UN mission said it “will call a new round of political dialogue” on December 9, without saying where talks would be held nor who would participate.In September it held talks in the southern town of Ghadames, bringing together the elected House of Representatives and members who have boycotted the sessions.
Previous rounds have not included members of armed groups linked to both sides but diplomats hope the talks will start a wider dialogue about Libya’s political crisis.
UN Special Envoy Bernadino Leon has also met the head of a rival parliament based in Tripoli.
Prospects of talks have been complicated by recent air strikes claimed by Al Thinni’s forces in western Libya, which is controlled by Libya Dawn.
The Opec member has been in chaos since Muammar Gaddafi was toppled in a eight-month uprising in 2011.Source:  Gulfnews