You are here: Home / Senza categoria / Assad: I do not fear Saddam and Gaddafi’s fate. If the ship sinks, everybody will die 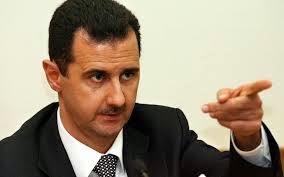 In his response to the concerns about him meeting the same fate as former Iraqi President Saddam Hussein and former Libyan leader Muammar Gaddafi, Syrian President Bashar al-Assad said, “A captain doesn’t think of life and death, he thinks of saving his ship,” and added, “If the ship sinks, everybody will die, so we would rather save the country.”

Reuters quoted al-Assad, during an interview with Paris Match magazine, as saying, “Terrorism cannot be destroyed from the air, and you cannot achieve results on the ground without land forces who know the geographical details of the regions and move in tandem with the airstrikes,” adding, “after two months of the alliance’s airstrikes, there are no tangible results on the ground in that direction.”

He also added, “Saying that the alliance’s airstrikes are helping us is not true,” noting that “Had these airstrikes been serious and effective, I would have said that they would be certainly useful to us.”

Al-Assad indicated, “We are the ones fighting the battles against ISIS on the ground, and we haven’t felt any change, particularly that Turkey is still extending direct support to ISIS in those regions.”