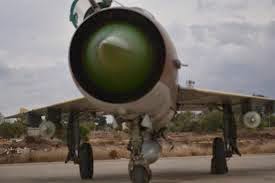 Forces allied to one of two rival governments vying for power in Libya conducted air strikes near the Tunisian border and vowed to shut the main land border crossing between the two countries, officials said.

Libya is caught in a conflict between two governments, one self-declared after a group called Libya Dawn took over Tripoli in August and the second led by internationally recognised Prime Minister Abdullah Al Thinni, who was forced out of the capital and now operates from eastern Libya.

There were different accounts of the air strikes yesterday, the latest in a series this week, part of turmoil gripping the oil-producing country three years after the ousting of Muammar Gaddafi.

Mohamed El Hejazi, a spokesman for the army in the east allied to Thinni, said his forces had bombed military targets near the Tunisian border crossing of Ras Jdir as well as south of Tripoli.

“The Libyan National Army will control the border with Tunisia today,” he said, referring to the name of Thinni’s forces.

But an official at the border crossing said a strike had hit a civilian building, one person had been killed and five were wounded. “There is no military target here,” he said. The Ras Jdir crossing was working normally, he said.

Miftah Shinkara, head of the military council of the town of Gharyan, south of Tripoli, also said another air strike had hit a female student’s home.

“Warplanes attempted to bomb a military place but it seems they missed the target,” Shinkara said. A commander from Zintan in the western mountains allied to Thinni said the target had been a missiles battery.

On Wednesday, Thinni’s government said his forces had begun a military offensive to take back Tripoli. His allies from Zintan, which got expelled by Libya Dawn from Tripoli in August, have their own air strip.

Libya has struggled to reach stability since a Nato-backed war ended Gaddafi’s one-man rule in 2011. Former rebel brigades who once fought side by side have now turned on each other, aligning themselves with rival political factions in a scramble for control.