You are here: Home / Senza categoria / Tunisia remains in the crosshairs of the Libyan war 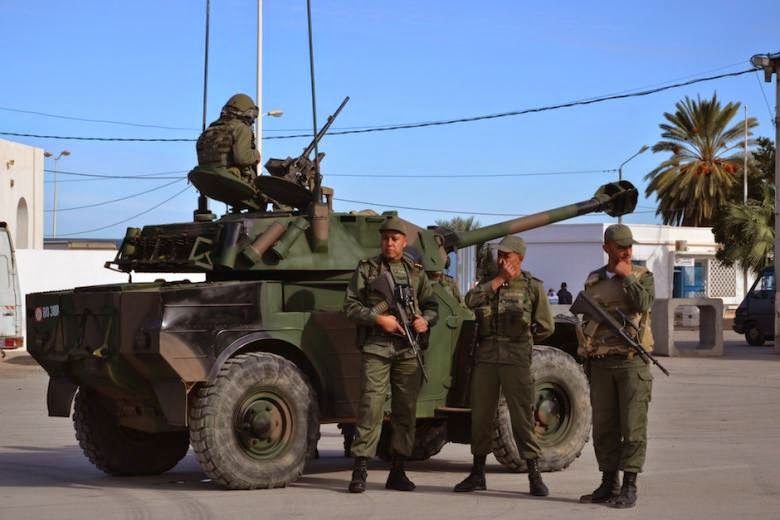 On Monday, December 8, Tunisian media reported that a special security unit arrested a Libyan leader from the Fajr Libya group which controls the capital Tripoli. The Interior Ministry did not deny the reports.

The militia leader’s presence in Tunisia and his success in infiltrating the borders validate Tunisia’s concerns over the possibility that the militants – who are fighting the forces of General Khalifa Haftar in Libya – would enter the country.

This concern is related particularly to the elements controlling the key border crossing of Ras Jdir, where Haftar’s forces have been engaged in bloody battles since the end of last week to liberate it from outlawed armed groups, as they are referred to in “Operation Dignity” statements led by Haftar.

Since the Mahdi Juma government took power in the country last February, Tunisia has tried to stay neutral regarding the situation in Libya. The Foreign Ministry, under Monji al-Hamdi, has managed to maintain Tunisia’s independence, unlike the first two Troika governments, which supported the Islamists against their opponents in an unprecedented move in the history of Tunisian diplomacy.

Al-Hamdi said that Tunisia “remains faithful to its diplomatic traditions, rejects foreign intervention in Libya, and insists on dialogue between all parties.”

Tunisia played an active role in this direction through meetings held in Algeria, Egypt, and Sudan. However, the developments in Libya; the edging of the armed conflict towards the Tunisian borders (around 20 kilometers away); successive explosions, and gunfire heard in towns and villages along the border created a state of fear within Tunisia’s border strip, despite the assurances of Prime Minister Juma. The latter said in a press conference that “the state is capable of protecting Tunisians and is ready for all possibilities, including the worst scenarios.”

Despite its significance, Jumaa’s statement was not enough to reassure Tunisians, given the fragile situation in their country. Since the fall of Colonel Muammar Gaddafi’s regime, Libya has been hosting large numbers of Tunisian militants, who are planning criminal and retaliatory operations against Tunisia, according to the Interior Ministry. Also, Libya is a main source for smuggling arms and ammunition, and harbors the most infamous Tunisian terrorists implicated in assassinations and terrorist operations, such as Abu Ayyad and most leaders of the banned Ansar al-Sharia group, which includes suspects in the assassination of Mohammed Brahimi and Chokri Belaid.

Libya is a “convenient ground” for hundreds of young Tunisian men to train on weapons and explosives. The Interior Ministry uncovered last week a cell specialized in sending young men to Turkey and Syria through Libya after training them on the use of weapons, and drug smuggling.

The collapse of the Libyan state and the weak government headed by Abdullah al-Thani, which derives its legitimacy from the Libyan parliament, are the primary threat to the security of the Tunisian people. While Libya embodied the hope that could save Tunisia from its economic crisis by regaining its position as a job and trade market that would revive the Tunisian economy, it has now become a real “nightmare” due to the collapse of the state and the absence of a strong negotiating partner.

Tunisian authorities and public opinion remain neutral to the conflict in Libya between the parliament, al-Karama Forces, and the al-Thani government on one hand, and the National Conference, Libyan Dawn (Fajr Libya) forces, and the al-Hasi government on the other. However, Tunisia needs to keep a watchful eye on the developments in Libya to avert a possible flood.

Several Tunisian parties have accused interim President Moncef Marzouki, who is biased towards the National Conference, of seeking to postpone the presidential elections in the hope that he would be “saved” by the deteriorating situation in Libya, and the chaos that may result if Islamist militants raid the Tunisian border, which is very possible given the absence of the Libyan state.

Marzouki expressed regret over Essebsi’s refusal to face him in a debate, noting that he has the support of the “social left” in the upcoming presidential election, while the “ideological left” supports his competitor.
“For all Tunisians, the current conflict is between the old system, which is returning with all its power and former mechanisms, and the slowly-advancing new democratic system,” Marzouki said.

On the external front, he spoke about Syria. “Some believe that it was a diplomatic mistake (to cut off relations), but I do not see it as such. I believe it was our people who started the Arab Spring. The Syrian revolution followed the Tunisian revolution, not in imitation but as a continuation of it. I am truly surprised by those who oppose corruption, dictatorship, and killing people, but still find it normal for Tunisia – the cradle of the Arab revolution – to turn a blind eye to a corrupt dictator, a family dictator who displaced a third of his people and killed 200,000 of them under the pretext of a non-existent rejectionism. This is a position I will not change.”