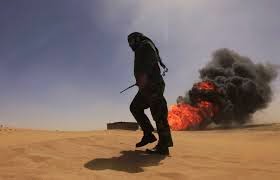 Islamist militias of Libya Dawn on Saturday launched a military operation in the oil crescent region and clashed violently with oil installations guards stationed in the Al-Wadi Al-Ahmar and Bin Jawad region, 500 km east of the capital Tripoli, according to a source of Libya Dawn.

A field commander of Libya Dawn forces, stationed near Al-Wadi Al-Ahmar, east of the city of Sirte, said the militias launched a surprise attack to liberate the oil crescent region from the grip of the “defense force of Cyrenaica.”

“The attack is a warning to this armed group that claims to be the guard of oil installations, but they are gangs of outlaws,” the commander told Xinhua on condition of anonymity.

Protests led by Ibrahim Jathran, a senior commander of the rebels in eastern Libya and a federal advocate of the eastern region of “Cyrenaica”, forcefully closed a number of oil fields and ports in eastern Libya for nine months, causing losses of up to 30 billion U.S. dollars.

Jathran formed a military force called “Defense Force of Cyrenaica,” and deployed his troops outside the oil crescent region, a move observers said was aimed to constantly control the oil fields and ports.

Libya has been witnessing a frayed political process after the 2011 turmoil which toppled its leader Muammar Gaddafi.

The country is now juggling two rival parliaments and governments. Now Jathran’s forces are known to be loyal to Libya’s elected government based in the eastern city of Tobruk, while Libya Dawn supports the Islamist government in Tripoli.