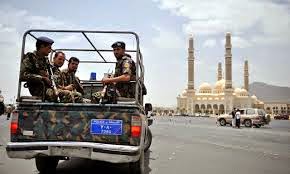 Yemeni troops on Saturday shot dead five al-Qaeda suspects disguised as women who fired at a soldier during a checkpoint inspection of their Saudi-bound bus, officials said.

Another suspect was wounded along with the driver in the shooting in Harad, a town 15 kilometers (nine miles) from the Saudi border, the officials said, adding two of those killed were Saudis.

“As one of the soldiers climbed on board the bus for an inspection, one of the suspects opened fire and wounded him, prompting shooting from other soldiers at the checkpoint,” said a government official who gave the casualty toll.

All six had been dressed in black robes and wore the niqab, a face-covering veil commonly worn by women in Yemen, the official in Harad told AFP.

A suicide belt and arms were also found on board the bus, and the wounded suspect and driver were being questioned, said the security official.

“The men are suspected of affiliation with al-Qaeda and were heading north towards Yemen’s border with Saudi Arabia,” he told AFP.

In July, six Saudi al-Qaeda suspects attacked a post on the border with Yemen, killing five security officers.
Saudi Arabia, which launched a huge crackdown on al-Qaeda following a spate of deadly attacks in 2003-2006, is building a three-meter (10-foot) high fence along its southern frontier with Yemen to counter illegal crossings and arms smuggling.

Al-Qaeda in the Arabian Peninsula (AQAP) took advantage of a collapse of central authority in the wake of the 2011 uprising to seize swathes of southern and eastern Yemen.

Yemen, a key ally of the United States, has been allowing Washington to carry out a longstanding drone war on its territory against AQAP. Many civilians unaffiliated with al-Qaeda have been killed by US drones in Yemen.

In recent years, AQAP has carried out a growing number of abductions, with several hostages still in captivity.

The militants remain active in southern and eastern regions of Yemen despite several military campaigns by government forces.

They have allied with tribesmen in southern Yemen to halt the advance of Houthi fighters who seized Sanaa unopposed in September, and who have since extended their control to coastal areas and regions south of the capital.

Several Houthi militiamen were killed and 10 tribesmen were wounded in fighting on Friday in Arhab, 35 kilometers (20 miles) from the capital Sanaa, according to sources on both sides.

Arhab is close to Sanaa International Airport and is a stronghold of the Islamist al-Islah Party.