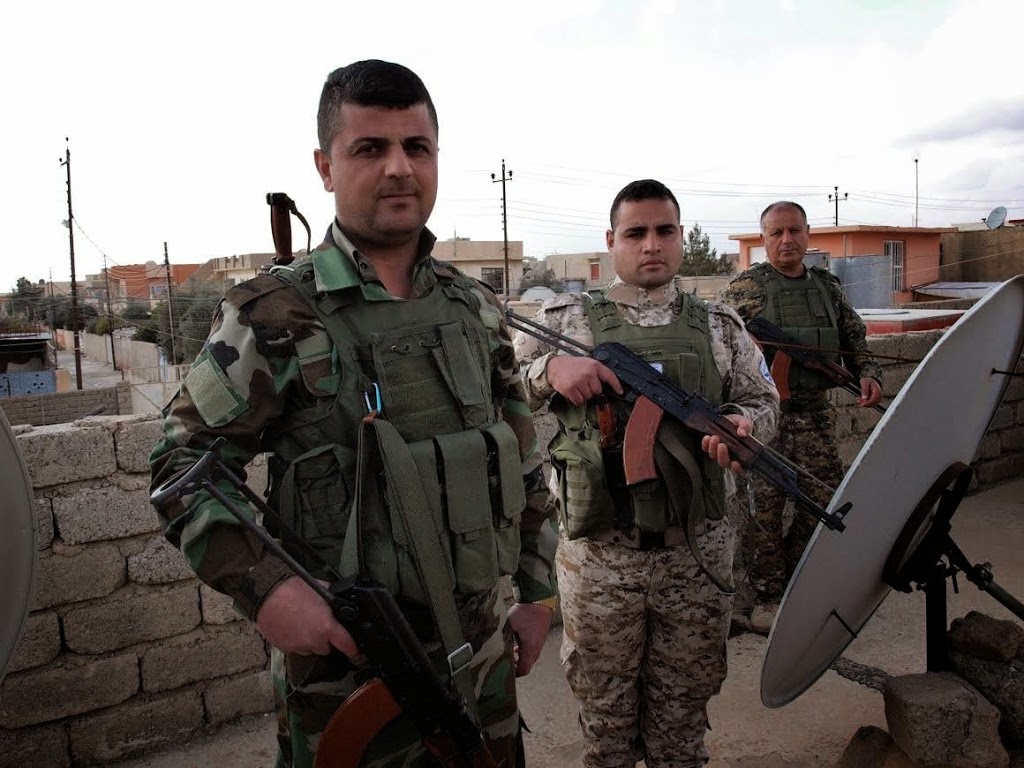 Villagers have not returned yet to the Christian village of Telleskof since it was cleaned of Islamic radicals, even though an armed Christian militia is there in force to protect them.

The Nineveh Plain Force (NPF) is one of the homegrown fighting groups that have sprung up to fight the extremist Muslim group ISIS, or Daesh as it is called locally.

“Daesh is near. They are only 2 kilometers away. They shoot at us every day,” said Safa’a Elias, 38, who leads the NPF in his home village of Telleskof. Elias helped recapture the town from ISIS last year, after two months of occupation.

Since August, ISIS has occupied most of the Nineveh Plains, the area between the ISIS stronghold Mosul and territory controlled by the Kurdistan Regional Government. The area is home to Christians, Arabs and other minorities. The Kurdish Peshmerga has worked with the NPF to push back the jihadists.

During their stay in Telleskof, ISIS looted houses and shops. Four kilometers away in the next village, Batnaya, the militants took over local homes and used them as bases.

Months after ISIS was evicted, Telleskof is still empty. Civilians say they don’t dare to return with ISIS so near.
A car drives past with furniture stacked up high on the roof. Civilians come, take with they need, and leave again – even though thousands of refugees wait impatiently in temporary housing in Iraqi Kurdistan for the chance to return home.

Only the military is present and mans the checkpoints. Occasionally, a shot rings out. A pothole in the road is a reminder of a grenade explosion.

“I call on all Christians in Iraq to come and help us. This is a struggle on life and death. Daesh has destroyed more Christian places than any of the others,” Elias said.

In fact, he was only partly correct. Recently discovered mass graves in the Yezidi region of Shingal are evidence of the minority group’s huge suffering at the hands of ISIS. Thousands of Yezidis are still missing.

Like the Christians, Yezidi’s have also set up their own militias. One is supported and trained by the Kurdistan region, the other by the Kurdistan Workers Party (PKK). The groups played a major role in pushing ISIS back from the Yezidi region.

The main militias in Iraq are Shiite, some of them revived after a call to arms against ISIS when with the group overran Mosul in June last year and the Iraqi army proved unable to stop the radicals.

The main militias are connected to Iran, like the Badr Brigade, led by Iraqi Shiites who trained in Iran and returned to Iraq after 2003, and Asaib Ahl al-Haq, which works with the Iranian Al Quds brigade.

The total number of Shiite militiamen in Iraq is thought to be around 800,000, a bigger group than the Iraqi Army.

The Nineveh Plain Force counts only about 150 men, but a newly graduated group of around 500 fighters will soon join Elias and his men. Even though the militia cannot pay any salaries, new volunteers come forward every day. As Elias said proudly, “Just since yesterday eight more signed on.”

The sound of a plane high in the sky shatters the silence. Every afternoon around 3pm, the coalition comes to take a look, according to Elias, who searches the bright sky for the plane.

“And afterwards they come back to hit Daesh,” he said.

A bit further down the road towards the border with ISIS, a unit of the Kurdish Peshmerga is situated, led by 45-year-old General Tarik Sulaiman. He said his men came under fire earlier that day.

“Daesh always starts, shooting mortars at us daily. Then we phone the coalition to come and bomb them,” he said.

In the room full of Peshmerga fighters, sweet coffee is being served. A general in civilian Kurdish clothes comes by to chat and exchange the latest news.

Sulaiman explains why the peshmerga is working with the NPF, and trains its fighters: “We have the same goal. To fight Daesh, so the civilians can return home.”

Not everyone thinks the Assyrian initiative to form a militia is helpful for the Christian community of Iraq. The Chaldean Patriarch Louis Seko has warned that although Christians should be able to defend themselves, the forming of militias could eventually destroy the country. Christians became victims of the fighting between Shiite and Sunni militias in Baghdad after the American invasion of 2003.

Still, many people support the Kurdish authorities’ initiative to train minorities in order to form special units within the Peshmerga that can protect their own areas.

A major issue still to be resolved is the fact that many Arabs living in villages next to Christians have worked with ISIS – and this is preventing Christians from returning home.

Elias stresses that his problems are not with any religion.

“We know who worked with Daesh. Not all Muslims did. Most of them are like our brothers – we have nothing against them at all. But we will kill all Daesh, definitely.”