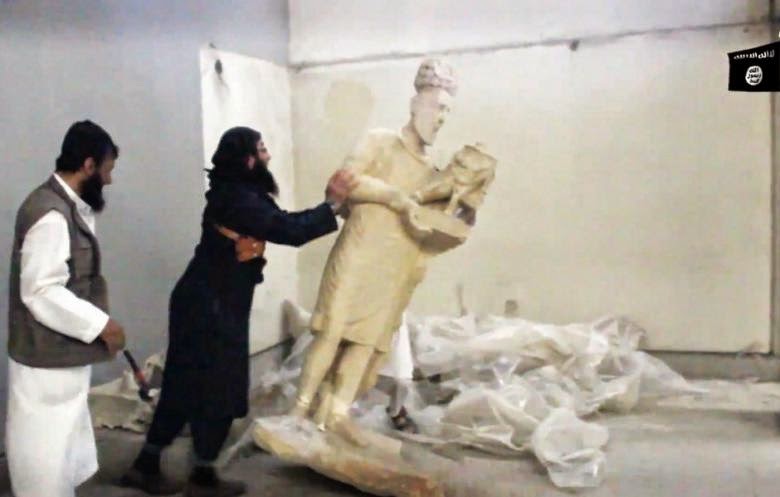 The head of the United Nations’ cultural agency on Thursday demanded an emergency meeting of the world body’s Security Council following the mass destruction by jihadists of ancient artifacts in Iraq.

“This attack is far more than a cultural tragedy — this is also a security issue as it fuels sectarianism, violent extremism and conflict in Iraq,” UNESCO chief Irina Bokova said in a statement.

The Islamic State of Iraq and Syria (ISIS) group on Thursday released a video in which its militants were seen smashing ancient statues and attacking artifacts — some of them identified as antiquities from the 7th century BC — to pieces with sledgehammers in the main museum in Mosul, saying they were symbols of idolatry.

They were also shown using a jackhammer to deface a large Assyrian winged bull at a huge archeological site also in Mosul, their biggest hub and Iraq’s second city,

Bokova pointed out that some of the statues destroyed in the video were from the ancient city of Hatra, a UNESCO world heritage site which lies around 100 kilometers (60 miles) southwest of Mosul.

She also said the destruction was a violation of the UN Security Council’s resolution 2199, which was adopted earlier this month in a bid to curb trafficking of looted antiquities from Iraq and Syria, which is considered a key source of funding for ISIS.

In September, officials said that ISIS militants were using intermediaries to sell priceless treasures, such as ancient Iraqi artifacts, on the black market to finance their activities.

The militants gained some experience of dealing in antiquities after taking control of large parts of Syria, but when they captured the northern Iraqi city of Mosul and the Nineveh province in June, they gained access to almost 2,000 of Iraq’s 12,000 registered archaeological sites.

Archaeologists and heritage experts have described the destruction as a catastrophe and compared the 2001 dynamiting by the Taliban of the Bamiyan Buddhas in Afghanistan.

Lamia al-Gailani, an Iraqi archaeologist and associate fellow at the London-based Institute of Archaeology, said the militants had wreaked untold damage. “It’s not only Iraq’s heritage: it’s the whole world’s,” she said.
“They are priceless, unique. It’s unbelievable. I don’t want to be Iraqi any more.”

Thomas Campbell, the director of New York’s famed Metropolitan Museum of Art condemned the “act of catastrophic destruction to one of the most important museums in the Middle East.”

“This mindless attack on great art, on history, and on human understanding constitutes a tragic assault not only on the Mosul Museum, but on our universal commitment to use art to unite people and promote human understanding,” he said in a statement.

“Such wanton brutality must stop, before all vestiges of the ancient world are obliterated.”

The director of UNESCO’s Iraq office, Axel Plathe, would not comment on the content of the video, saying it has yet to be verified. But he described the damage to Iraq’s heritage since ISIS overran Mosul last year as an attempt “to destroy the identity of an entire people.”

Plathe said UNESCO was working with Iraqi authorities and governments of neighboring countries to crack down on the smuggling of artifacts from areas under ISIS control, and had alerted auction houses to be on the lookout for stolen items.

ISIS espouses a strict Salafist interpretation of Islam, deeming many other Muslims to be heretics. Its fighters have destroyed Shia and Sufi religious sites and attacked churches, tombs and shrines and burned precious manuscripts and archives in the parts of Syria and Iraq under their control.

“Muslims, these relics you see behind me are idols that were worshiped other than God in the past centuries,” the unidentified man in the ISIS video said.

“What is known as Assyrians, Akkadians and others used to worship gods of rain, farming and war other than God and pay all sorts of tributes to them.”

Iraq’s heritage already suffered a major blow in the lawlessness and looting that followed the toppling of President Saddam Hussein by US-led forces in 2003, when looters torched buildings and ran off with treasures thousands of years old.

Last week, ISIS released another video showing a pile of books in flames.

An employee of the Mosul museum said he feared these books were manuscripts from the library of endowments, although the library itself was still in tact last week.

In early December, Bokova called for “protected cultural zone” in both Iraq and Syria, stressing the importance of cooperating with local actors and setting the Syrian city of Aleppo as a start point.