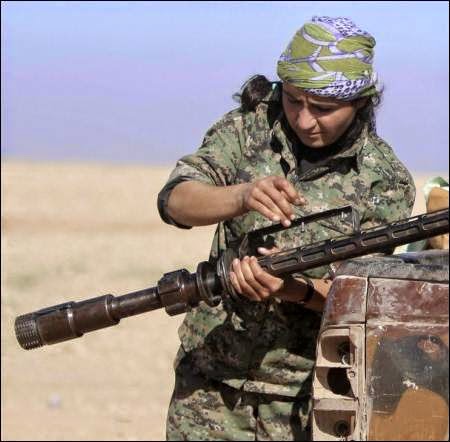 Every night before 27-year-old Arin goes to bed, she hangs her Makarov, a Russian semi-automatic pistol, from a steel coat rack by the entrance to her one-bedroom apartment in a small, dusty town on the Syrian border with Iraq.

The pistol was an award for her success on the front line in the battle to protect Syrian Kurdistan (Kurdish areas of northeastern Syria) and is a far cry from her life a year ago when she was working as a nurse in Cologne in Germany.

“This is a bloody war,” Arin, using only her combat name, told the Thomson Reuters Foundation at the almost deserted apartment block in Tel Kocher in Syrian Kurdistan.

“But we need to fight it, we need to protect our women and children or nobody else will defend us.”

Arin is one of thousands of young Kurdish women who have taken up arms in the past two years, with Kurds, Syria’s largest minority group, largely left to their own devices by President Bashar al-Assad’s forces battling Islamic State militants who have seized large areas of Iraq and Syria.

About 7,500 women are estimated to have joined the Women’s Protection Unit, or YPJ, many as volunteers, which was set up in 2012 as part of the People’s Defense Unit (YPG), the Kurds’ dominant fighting unit in the northern Syria region of Rojava.

Their aim is to fight any group that threatens Kurdish inhabited areas of Rojava and the YPG has taken defacto control over www.Ekurd.neta sizable chunk of Syria’s predominantly Kurdish north.

While female fighters are common within the ranks of Kurdish forces, a women’s only combat unit is unusual for the Muslim world where some Islamic traditionalists are of the view that women should not engage in combat.

Like the followers of Islamic State, many Kurds are Sunni Muslims but this band of young female fighters hope their frontline role will help put women on an equal footing with men.

“We want to set an example for (both) the Middle East and the West. We want gender equality for all,” said one of the six other women in Arin’s unit who all live in the same, small apartment.

When asked for their full names, the women declined, preferring to be known and addressed by their noms de guerre.

David L. Phillips, director of a program on Peace-building and Rights at Columbia University’s Institute for the Study of Human Rights in New York, said these women were making a mark.

“(They) are some of the fiercest and most effective fighters. Many of them are widowed, and strongly motivated on the battlefield by their personal loss,” he said.

Human Rights Watch has reported serious human rights abuses by the Syrian government and other opposition fighters in the Syria and also said Kurds in parts of northern Syria have carried out arbitrary arrests and failed to investigate the killings and disappearance of political opponents.

Arin, who was born and raised in Germany, said she was awarded her pistol after she killed 20 Islamic State militants, earning her the reputation among her colleagues as one of the most dangerous snipers in the group.

Born in Cologne of Kurdish parents, Arin graduated from nursing school and was working there when the Syrian conflict started, rising a pro-democracy movement which grew into an armed uprising and inflamed regional confrontations.

Some 200,000 people have died during the four-year conflict, according to the United Nations.

“I had a good life, I liked living there,” Arin said, dressed in a dark green camouflage uniform with baggy trousers, but she felt she had to do something as the news became worse.

“I remember watching television when I saw women and children slaughtered by Daesh (Islamic State), and I couldn’t stand it anymore,” she added, using a term for Islamic States that is widely viewed as derogatory.

Last year she travelled to Syria to join the YPJ and now heads her unit, which originally had 20 members, mainly from Syria and Turkey. Today only seven survive.

She was reluctant to give too many details about the group’s combat operations or to comment on any links between the YPJ and the Kurdistan Workers’ Party, or PKK, an organization fighting for Kurds in Turkey that is designated a terrorist group by the United States and European Union.

Syrian Kurds have an ambiguous relationship Assad, who has mostly left the Kurds alone while focusing firepower on insurgents fighting to unseat him. The Syrian Kurds have denied cooperating with Assad.

When they’re not fighting, the unit of seven women try to avoid talking about war. They cook and laugh as if they were living an ordinary life but their lives are far from normal.

Arin hasn’t talked to her parents since she left Germany.

“I don’t call them, it’s better this way,” she said, adding that she might call then one day, once the war is over. “My life is here with these brave women. They are my family.”

Her loyalty to her fellow soldiers is typical of YPJ members who boast to live by a code of honesty, morals and justice, addressing each other as Haval, the Kurdish word for comrade and friend.

The schedule of Arin’s unit is always tight, starting with breakfast at 8 a.m. every day and strategy meetings.

Nisan, a 24-year-old combatant, spread a grey plastic table cloth on the floor. She lost her right finger while fighting in Rabia, the Iraqi town adjacent to Til Kocher, in August.

Rangin, another sniper, came in with breakfast: tomatoes, olives, goat cheese, and homemade bread.
After breakfast, the unit’s phone rang.

Orders were given and three women grabbed their combat gear, ready to jump in a car waiting for them outside to take them to Jezza, a town close to Kobani near the Turkish border and one of the most violent flashpoints in the war.

“We are going to fight the Daesh, take care,” Arin said as she closed the door behind her.