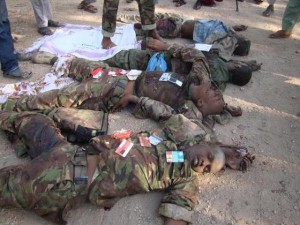 The Amisom and Somalia National Army troops have captured 22 towns and villages from al Shabaab and killed 72 insurgent fighters in eight days.

“The Amisom announced the resumption of active military offensive operations against al Shabaab. This offensive, code named Operation Juba Corridor is aimed at degrading al Shabaab by removing them from their strongholds in the Gedo, Bakool and Bay regions of Somalia,” Njuguna said.

He said the Amisom and SNA troops wounded 24 and captured nine others.

Njuguna said al Shabaab camps in Dolono and Elalan and an assortment of weapons and ammunition were also captured.

“All of the wounded and captured al Shabaab fighters as well as the weapons and ammunition are in adherence to the African Union Standard Operating Procedures for such matters,” he said in a statement.

He said the recovery of these villages and towns, especially Baadhere and Dinsoor, is a major boost to free people from the tyrannical and savage al Shabaab rule of more than seven years.

Dinsoor has served as al Shabaab’s main base since October 2014.

Last week, Somalia President Hassan Sheikh Mohamoud said the fight to secure Somalia may be hard, but his commitment and the resilience of his country has never been stronger.

Amisom condemned the attack on the Jazeera Palace Hotel in which 15 people including a Kenyan diplomat, a Chinese national and three journalists were killed on Sunday afternoon.