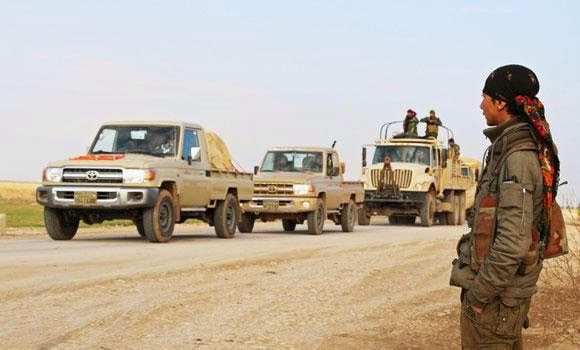 Backed by US-led coalition airstrikes, Kurdish fighters pushed into the contested northern Iraqi town of Sinjar on Sunday, touching off heavy clashes with Islamic State militants who have controlled the area for months.

On Sunday, loud explosions and intense gunbattles were heard from inside the town as coalition aircraft bombed Islamic State militants.

The president of the self-ruled northern Kurdish region, Masoud Barzani, toured Kurdish positions on Mount Sinjar, where he vowed to defeat the Islamic State group.

“Most of the districts are under our control,” Barzani told peshmerga troops. “We will crush the Islamic State.”

Meanwhile, Iraqi counter-terrorism forces launched an offensive Saturday to retake the military airport near the town of Tal Afar from the IS group, said a Baghdad official, speaking on condition of anonymity because he was not authorized to talk to media.

In Syria, meanwhile, the US-led coalition carried out at least a dozen airstrikes against IS-controlled towns in the northern Syrian province of Aleppo, the Britain-based Syrian Observatory for Human Rights said.