You are here: Home / Senza categoria / Lebanon’s Christians take up arms in the face of ISIL threat 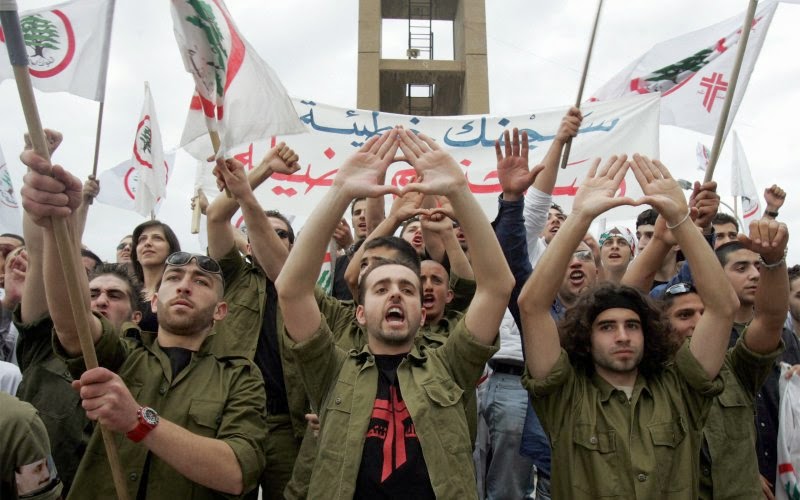 Rifaat Nasrallah peers through his night-vision goggles and into the mist that shrouds Lebanon’s mountainous border.

They are hiding up there, he says as he points into the darkness towards what he claims are 5,000 Islamist militants waiting to pounce. “We are living on a volcano.”

In Lebanon’s Bekaa Valley, close to the Syrian border, a cluster of Christian villages are living under the threat of attack from militants belonging to ISIL and the Al Qaeda affiliate, Jabhat Al Nusra. While the villages have been decorated with Christmas lights and inflatable Santa Claus figures, the festive spirit has been overwhelmed by fear.

The residents have formed armed units to defend their towns.

In this outpost in Ras Al Baalbek, a small stove wards off the cold that grips the valley at this time of the year. The same chill is forcing more Islamist militants hiding in caves higher up the mountain to descend to lower altitudes.

“It’s a harsh land, it’s winter, there is snow; it’s a problem. They are getting increasingly desperate,” says Mr Nasrallah, the leader of a group of Christians who have taken up arms to protect Ras Baalbek.

At first glance, the small outpost hugging the anti-Lebanon mountains is a regular dwelling, sparsely decorated with a few sofas. However, leaning against the wall is a tripod mounted AK-47 with an extra 75 round magazine attached.

Last week an outpost like this but just outside the town was engaged in a firefight with militants from ISIL. They were just 300 metres away, the closest they have come this year.

The militants fled into the mountains after a Lebanese army offensive drove them out of the nearby border town of Arsal in August.

Fighters belonging to ISIL and Jabhat Al Nusra took almost 30 Lebanese security personnel with them. Four have been executed and the rest have yet to be released.

The militants have been trying to negotiate a way out, so far without success. Skirmishes with the Lebanese army and nearby villages are increasingly frequent.

“If they focus all their troops on one village, it will be a disaster,” says Mr Nasrallah.

The band of fighters started out with about 60 men around the time of the battle of Qusayr in May 2013, when Hizbollah and the Syrian army drove Syrian rebels from the town just across the border in Syria.

Hundreds of hardline Islamist militants fled into the mountains towards Lebanon and the Christian villages with the Syrian army shells chasing them. The villagers could tell how close they were by the noise of the explosions and that the Islamists would even steal clothes from their washing lines, Mr Nasrallah said.

The militia leader was injured when a mortar hit next to a church being built in the village of 18,000.
“We all had guns anyway, how can we not protect our village?” Mr Nasrallah says matter-of-factly.

In the months that followed ISIL became more prominent in Syria and their atrocities against minority religious communities more common.

The group’s seizing of territory in Iraq earlier this year only increased their concerns.

“Look at the facts on the ground; they kill Christians,” says Mr Nasrallah bluntly.

He would not reveal how many men he now has under his command but said it was many more than 60.
There is a training programme for young men who, unlike himself, have no experience of Lebanon’s own civil war that ended in 1990.

The choice to take up arms is natural for Mr Nasrallah.

“I’m a fanatic Christian,” he says, sitting in his house surrounded by a statue of the Virgin Mary, a crucifix and bottles of holy water. “How can I not defend my house and my family?”