You are here: Home / Senza categoria / Lebanon’s Ras Baalbak, ISIL’s next target? The town is taking up arms in self-defence 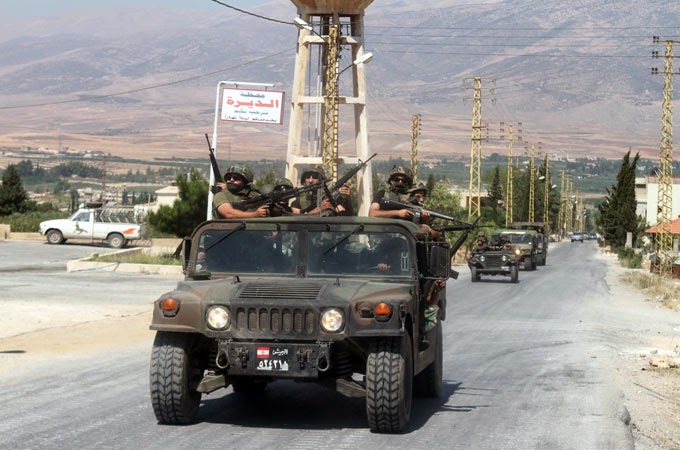 Nestled in the hills hugging the Bekaa valley on the Lebanese side of the border lies a small Greek Catholic town that has become the new focal point in the latest chapter of the war in Syria and its spillover into Lebanon.

Ras Baalbak, with a population of approximately 1,400 inhabitants during the winter and 8,000 during the summer, caught media attention earlier this month when a British newspaper credited the British army with repelling a “massacre” on the town by the Islamic State of Iraq and the Levant (ISIL) through the speedy establishment of several watchtowers for the Lebanese army.

Yet, within hours after the report emerged, a Lebanese army patrol was ambushed by al-Qaeda-affiliated al-Nusra Front fighters in the barren mountainside of the town, leaving six soldiers dead and one wounded, calling into question the efficiency of the multimillion dollar British project, while also drawing attention to a potential weak spot of the Lebanese army and local fighting forces.

Over the past few months, the area has witnessed several confrontations between the fighters and the Lebanese army and local forces, the most recent being on December 7, when the army was engaged in heavy clashes, according to the National News Agency.

According to local armed fighters, residents and analysts who spoke to Al Jazeera, Ras Baalbak is of strategic value for the fighters, making it an attractive target for groups keen to expand their foothold into Lebanon.

On the outskirts of the town lies a base with an unobstructed view of both the mountainside and the valley. This fortified base belongs to one of the local armed forces, hosting a gaggle of armed young men clad in military fatigues, and an assortment of heavy weaponry.

Groups such as Hezbollah, the Hezbollah-affiliated Resistance Brigades, and the Syrian Social Nationalist Party began establishing a limited military presence in and around the town approximately six months ago, after it became clear the area was becoming a target of attacks by the militants.

“Militarily speaking, Ras Baalbak is a weak point, which makes it attractive for [al-Qaeda-affiliated] militants,” explained one commander at the base.

“It’s a symbolic victory for the militants if they can take this town; after all it’s Christian. They’re less likely to win any support if they try and enter the neighbouring town of Feqha, which is predominantly Sunni.”
According to another fighter, who has spent significant time in Syria fighting against the armed opposition and is now stationed in Ras Baalbak: “The militants are approximately 10km away, and can get as close as 800m or so to the village, if the weather is foggy.”

“They are getting desperate because of the upcoming winter months, so we are expecting them to conduct more attacks on the area,” he added.

Increasingly over the past two years, Lebanon has witnessed a number of attacks and clashes at the hands of the Syrian armed groups residing in the mountainside that straddles the Lebanese-Syrian border, as they attempt to secure a base in the country.

Mario Abu Zeid, an analyst with Carnegie Middle East Centre, who spent the last few months doing field research in the area, explains that while the town will not necessarily be “the next battleground”, for the fighters holed up in the mountainside, it is a strategic point in a larger plan they have in place for the area.

“They are looking for weak spots, and [the area of Ras Baalbak] is one of them,” he said. “Because of the nature of the borders there, it is impossible for the Lebanese army to have full scale observation. Furthermore, the fact that it is a Christian-majority town, a clash would generate sectarian strife, making it important for both the militants and the army.”

According to Abu Zeid, while both ISIL and Nusra Front have an interest in launching attacks in the area, they have different motivations. “For ISIL, they would want to attack it because of the symbolic victory of capturing a Christian town, whereas for Nusra, they are interested in kidnapping more soldiers to use as bargaining chips.”

“The army is trying to prevent any sectarian strife precisely in those areas, so you’ll find that there are more soldiers and patrols there, which again makes it more attractive and more of a target for kidnappings.”

Both Nusra and ISIL are holding a number of Lebanese soldiers and policemen hostage following clashes in nearby Arsal in August. They have executed four hostages so far, after indirect negotiations with the Lebanese government stalled.

Over the past few months, a number of the younger residents of the town have joined up with groups like the Resistance Brigades to conduct patrols and security checks, while other concerned residents have formed an armed version of “neighbourhood watch”.

“We conduct patrols, five or six made up of 20 or so people, in the evenings,” said Arja, sitting in his home which is located next to the ruins of an old church. “We work around the village in coordination with the municipality and the boys in the area,” he said referring to the local armed groups.

“We all have military experience, and we all have weapons at home,” said Radwan, sporting an ushanka hat and a long overcoat.

Meanwhile, fighters in the more established groups conduct daily patrols within the outskirts and the mountain range, coordinating closely with the Lebanese army, which maintains a heavy presence in the outskirts since the clashes in Arsal.

A military source, who is not authorised to speak to the media said: “During the Arsal battle, the tower [in Ras Baalbak] wasn’t finished, but there was an army presence on the ground, and reinforcements were sent to the area.

“While the construction of the British-funded towers will certainly aid the Lebanese army, they cannot protect the area from future attacks, as last week’s deadly ambush demonstrated.

“The militants weren’t looking to start a battle in Ras Baalbak, but were using the roads in the outskirts near there for the fight in Arsal,” he added.

The townsfolk of Ras Baalbak are also less than impressed with the media hype over the towers, complaining that such attention has singled them out and made them an unnecessary target.

“Those who hear these stories would think the British army is here protecting us,” Radwan grumbles. “They’re not. We know there is only one tower around here, and it’s barely finished. It’s also about 10km way.”

Arja agreed, claiming to know “every hill, every mountain in the surrounding area,” and “there is nothing but one incomplete tower”.

“These reports are dangerous as they encourage the militants to enter.”

But he insisted that despite the proximity of the fighters to their homes and the increasing threat of attacks, they will not leave.

“About five months ago we were hit with 16 rockets, which injured several people,” he said. “We know we are a target. But we are not afraid, we don’t have fear.”