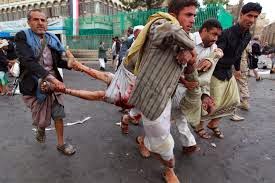 Two were killed Tuesday in the Yemeni capital, where many supporters of the Houthi movement live, in a series of small bomb attacks and a drive-by shooting, a medic and witnesses said.

One of the bombs was placed near the home of Ismail al-Wazir, a professor at Sanaa University, state news agency Saba quoted the director general of the Sanaa police, Brigadier General Abdelrazzaq al-Mo’ayad, as saying.

Wazir, who is close to the Houthi group, escaped an assassination attempt in April when gunmen opened fire on his vehicle, killing two of his security guards.

No one has claimed responsibility for the April attack or Tuesday’s bombings, but the Houthis have been fighting the al-Qaeda and allied tribesmen since its gunmen took control of Sanaa in September and forced the resignation of a government they had long accused of corruption.

The blasts occurred early in the morning when only a few people were on the streets, witnesses said. One said he saw a man on a motorbike place the bomb outside his house and it exploded almost immediately.
Another bomb exploded when a member of the Popular Committees, a local force set up by the Houthis after they captured Sanaa, was trying to dismantle it, police said.

Several houses and some cars were damaged from the explosions.

In a separate attack on Tuesday, a prominent Houthi figure, Faisal Sherif, was shot dead by two gunmen riding a motorcycle near the University of Sanaa, witnesses and a Houthi source said.

The instability in Yemen has raised fears that the country, next to oil-rich Saudi Arabia and key shipping routes from the Suez Canal to the Gulf, could become a failed state along the lines of Somalia.

Yemen has been in turmoil since mass protests in 2011 forced long-ruling President Ali Abdullah Saleh to step down.