You are here: Home / Senza categoria / Responding to the Islamic State with music 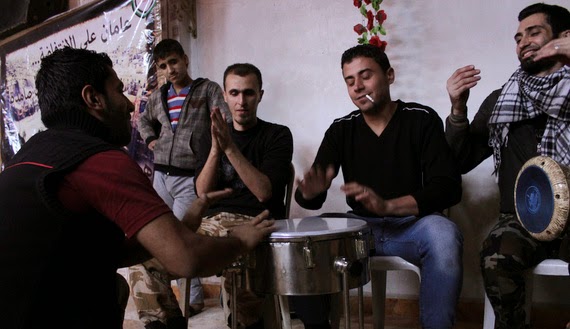 A video titled “We’re coming to slaughter you,” published by the Bidayyat Foundation Channel in June 2013, has gone viral online. The video was produced by a group of graduates from the Higher Institute of Dramatic Arts in Damascus, and marked the first musical backlash against the religious extremism sweeping Syria. Previously, musical responses to the war were limited to songs against the Syrian regime’s violence.
The first scene of the video shows a Syrian child vowing to slaughter regime loyalists amid celebrating crowds. In another scene, a different child pledges to destroy the revolution, threatening it with the Syrian army’s 4th Armored Division.This is when the song “We’re coming to slaughter you” begins, using cynicism and sarcasm in a shocking way, as Syrians from all walks of life, and from different sects and religions, vow to slaughter one another. The video is satirical, deriding the bloody reality of Syria’s war today. The video ends with the sentence, “We will skin humans alive and we will banish humanity.”
However, musical production did not stop at this. Following the expansion of the Islamic State (IS) in Syria and Iraq, which imposes a number of absurd rules on the citizens, a series of songs and videos were produced ridiculing IS’ brutality and violence. Syrians were not the only ones to make these videos, as many people from the region have followed their lead.In Lebanon, The Great Departed wrote a cynical song titled “Oh master Abu Bakr al-Baghdadi, you who rules by God’s rules,” which was written and composed by the band’s founder, Khaled Sabih.
Sabih and the other singers and musicians sing mocking songs, deriding IS and the brutal laws imposed on its people, especially on women.
However, IS, which has extensive media and technical capabilities, has not stood idly by. It also tried to retaliate with music slamming its critics and opponents. When searching YouTube, one can find a series of songs produced by IS militants to promote their group.
What is interesting is that all these songs can be characterized as Gulf folk music, which proves that these videos were made by people from the Gulf.Moreover, there were videos showing Gulf poets falsely praising and deriding one another. Some were crying out their support for IS, while others were denouncing the group.
Angry backlashes against IS have become increasingly common among Syrians, who are suffering the most at the hands of the violent group.

In April 2014, Rasha Abbas, Batoul Mohammed, Gerard Aghapashian and Amen al-Arnad produced a video dubbed “I love death,” which was also created in collaboration with the Bidayyat Foundation. In the video, Abbas plays the role of a Syrian television presenter, who is wearing too much makeup and speaks with a heavy Arabic accent. She interviews a primary school student who sings charmingly and speaks eloquently.

Abbas dedicates the song, as is common in Syrian television, to the “commander and the protector of children and young people.” Meanwhile, Mohammed and Aghapashian’s song is a mockery of death in the war, whether by mortar bombs, snipers or knifes. In the background, one can see people clad in black, dancing to the music. The video also cleverly links the extremist rhetoric to the emergence of the extremist movements.Social networking sites are full of musical productions by amateurs and professionals, inventing songs as a backlash against jihadist organizations, which have been epitomized in the activities of IS. Indeed, IS’ heinous crimes and absurd laws have spurred angry responses. Today, music seems to be an efficient tool to express anger against IS acts. The Syrians and Lebanese started this trend, and Iraqis and people from the Gulf have followed suit.