You are here: Home / West Asia / 70 % of drug-trafficking controls by Taliban on Pak soil

Afghanistan Ministry of Interior (MoI) says nearly 70 percent of Afghanistan’s drug-trafficking controls by those Taliban leaders who are in Pakistan. 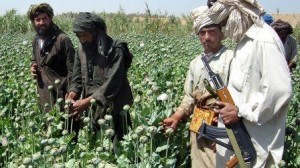 Spokesman of MoI stated that the ministry has arrested more than 1500 drug traffickers in the past six months.

“There is a close relationship between the drug-dealers and Taliban leaders. According to the information of Special Forces, nearly 70 percent of drug-trafficking controls by Taliban who are in Pakistan’s soil. And there is no sign that Pakistan fights against narcotics,” said Sidiq Sidiqi, MoI spokesman.

In the meantime, spokesman of MoI says the Afghan forces start ‘Shafaq’ operation in winter offensive and the armed Taliban group will suffer heavy causalities.

“Our operation in Faryab caused the Taliban’s shadow district governor to be killed and we get ready for the winter offensive,” Sidiqi added.

While concerns expressed over Taliban’s recruiting process reaches to the other provinces.

“Now, the enemy has influence in the cities and the Afghan forces must be more focused on cities and thwart threats in the winter season,” said Merza Muhammad Tarmand, former deputy of MoI.

Afghan security forces called the drug tracking a serious threat against the security of the country as the opium and poppy cultivation has hit a high record during the past year.