You are here: Home / Africa / 7 killed in Al-Shabaab clashes in Somalia 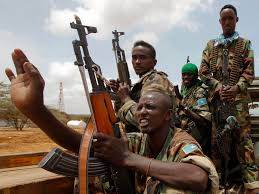 At least seven people were killed after heavy fighting broke out between the Somali army and Al-Shabaab in Afgoye town, officials said to middleeastmonitor.com.

Abdirahman Ahmed Hassan, a NISA officer, told the Anadolu Agency over the phone that the fighting began after Al-Shabaab militants attacked an army base in Afgoye, in the lower Shabelle region of Somalia.

“Three of our forces were killed and three others wounded during the clash. We killed four Al-Shabaab militants. We captured three alive,” Hassan said.

Agoye is an agricultural and strategic town located only 30 kilometres southwest of the Somali capital Mogadishu, which was once under Al-Shabaab control.

In late October, Al-Shabaab attacked and captured Afgoye killing at least 12 people in the process.