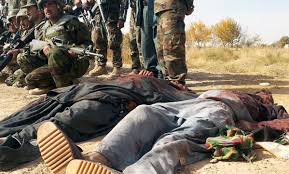 A total of 26 militants including seven foreign nationals have been confirmed dead after unmanned planes targeted the positions of Daesh militants in Darzab district of the northern Jawzjan province in Afghanistan on Tuesday, Xinhua news agency reported provincial police chief, Faqir Mohammad Jawzjani, as saying, according to bernama.com.

Some 20 more insurgents sustained injuries in the raids, the official added.

Without identifying the nationality of the foreign fighters, the official said that foreign nationals from some countries are fighting alongside Daesh insurgents in Darzab district.

However, he said that investigation has been initiated.

Meantime, Afghan defence ministry has confirmed that five Daesh commanders including notorious Raes Ghani and Agha Rahim are also among those killed in the air strikes.