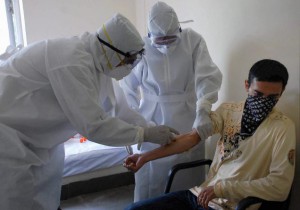 Several deaths and more than a hundred cases of swine flu (H1N1 virus) have been registered on the Syrian coast over the past few days, according to Petra.gov .

The first announcement of the impact of the disease, issued by the Directorate of Health in Tartus on April 8, noted that two deaths had been recorded and some 15 people were infected with the H1N1 virus.

A doctor in Al Basel Hospital in Tartus stressed that seven deaths had been registered as of Monday evening in Latakia and Tartus, noting that supplies of the H1N1 vaccine had almost run out in Syria’s hospitals.