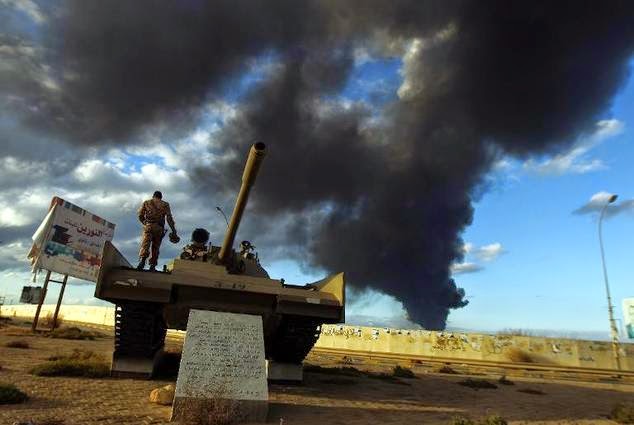 The militiamen belonging to the Fajr Libya, or Libya Dawn, launched an attack on Sidra port by firing rockets from speedboats, setting an oil tank on fire, security sources said.

“Speedboats fired several rockets at the terminals of Ras Lanuf and Sidra and one of them hit a tank south of Sidra port which then caught fire,” said Ali al-Hassi, security spokesman for the region.

Sidra is in the “oil crescent” region that has been the scene of recent fighting between government forces and Fajr Libya.

In early December, a warplane belonging to Fajr Libya fired missiles at a sector to the west of Sidra, in the first such raid in the energy-rich region.

According to witnesses, Thursday’s attack was launched overnight, and reported seeing smoke from the burning oil tank.

Military and medical sources said 18 soldiers and a Fajr Libya militant were killed during the latest clashes in Sirte, and another four soldiers were slain in Sidra.

Most of the dead soldiers belonged to the 136th battalion responsible for monitoring a power plant west of Sirte, the sources said.

The 136th battalion, which was able to repel the attack, is affiliated with the military, and most of its fighters are from a tribe loyal to former general Khalifa Haftar.

Haftar’s forces have been fighting alongside forces from the internationally recognized government of Prime Minister Abdullah al-Thani to overrun Islamists from Benghazi.

A military official said Haftar’s forces and pro-government troops had lost several positions in Benghazi to Islamist militias in the past days.

The fighting in Benghazi is only one element of the turmoil sweeping the North African country. Two rival governments, each with its own parliament and army, claim legitimacy, almost four years after a NATO-backed war ended Muammar Gaddafi’s one-man rule in 2011.

In August, Thani and his cabinet were forced to leave Tripoli for the east when militants from Fajr Libya seized the capital. The new rulers of Tripoli have set up their own administration, the General National Congress (GNC), which has not been recognized by the United Nations and world powers.

Meanwhile, also on Thursday, three Fajr Libya men were killed in a raid on Tripoli.

Amnesty International said in a report late October that both pro-government and rebel militias vying for control of western Libya are committing war crimes including torturing detainees and targeting civilians.

According to Amnesty, militias in the west showed “an utter disregard” for civilian casualties and accused them of indiscriminately lobbing artillery fire into crowded civilian neighborhoods, damaging homes and hospitals.

Oil prices rise
The latest clashes in Libya pushed oil prices higher in Asia on Friday, with US benchmark West Texas Intermediate for February delivery rose 10 cents to $55.94 in afternoon trade, while Brent for February gained nine cents to $60.33.

Analysts said some bearish dealers were taking profits on short positions, pushing prices up.
Since the clashes erupted on December 13, the country’s oil production has dropped to nearly 350,000 barrels per day compared with 800,000 previously, according to industry experts.

Trading volumes in Asia were thinner than usual with major regional financial markets including Hong Kong and Australia closed on Friday. US and European stock markets will also be shut for the Boxing Day holiday.

“Prices seem adamant on staying above support levels, and it seems they will hold for this festive season,” said Daniel Ang, investment analyst at Phillip Futures in Singapore.

“We continue to attribute this to the short-covering at the end of the year as oil bears close out positions to celebrate the New Year,” he said.