You are here: Home / Africa / Nine Killed in Al-Shabab attack on African Union base in Somalia 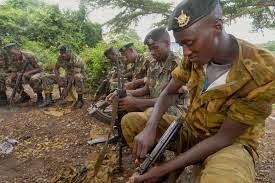 Three African Union (AU) soldiers, a civilian contractor and five al-Shabab militants were killed during a militant attack on the main AU base in Mogadishu, Somalia. The Islamists launched the attack during a Christmas day lunch hour on December 25.

Five militants were killed and three captured during an al-Shabab attack on the key base of the African Union Mission in Somalia (AMISOM) located in the capital of Mogadishu, AMISOM said in a statement.

“Our forces shot dead three of them, two detonated themselves near a fuel depot,” Col. Ali Aden Houmed said, as quoted by the Associated Press. “An investigation is underway on how they entered the base,” he added.

Three AMISOM soldiers and a civilian were killed in the fighting.

At least eight al-Shabab militants, some of whom were wearing uniforms of the Somali National Army, launched the attack during a Christmas day lunch hour, according to the New York Times. The Islamists were allegedly targeting a Christmas party at the Halane base, the media outlet said.

The African Union condemned the attack.