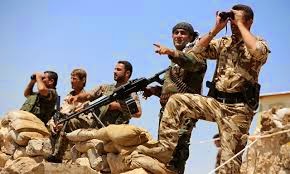 Troops have retaken a series of villages from ISIL this week and opened a corridor for thousands of minority Yazidis to escape Mount Sinjar.

“We have also seized major roads, particularly one that runs along the Iraqi-Syrian border. Whoever controls these areas has the upper hand,” he said.

He said US-led air strikes had helped the offensive.

“We’ve been guiding the coalition jets on where to target and that really helped in increasing their accuracy,” he said.

The international coalition battling ISIL has continued air strikes in the vincinity of the Sinjar Mountains in recent days, claiming to have destroyed vehicles and other infrastructure used by the group.

The Peshmerga managed to break an ISIL siege of Mount Sinjar on December 18, enabling thousands of Yazidi fighters and civilians trapped on top of the mountain for months to leave.

The Yazidis, who ISIL consider heratics, sought sanctuary on the mountain after ISIL attacked their villages in August, kidnapping or killing thousands of them.

Al Jazeera’s Mohammed Adow, reporting from the area on Thursday, said a road that just days ago was under the control of ISIL is now being used as an escape route for Yazidis.

“The stream of vehicles carrying Yazidis fleeing the Sinjar Mountains is endless,” he said.

Syria battles
In neighbouring Syria, where ISIL controls large swathes of land, Kurdish forces are also battling the group.
At least 44 ISIL fighters were killed in clashes with members of the Kurdish People’s Protection Units (YPG) on Thursday, according to the Syrian Observatory for Human Rights, a London-based monitoring group that gathers information on the conflict from local sources.

Thirty of them were killed when YPG regained control of the village of Qassiab in Hasakeh province, the Observatory said.

Another 14 ISIL fighters were killed in the town of Kobane on the Turkish border, the group said.

Fighting over Kobane began in mid-September, when the ISIL launched a bid to take it over, prompting tens of thousands of Kurds to cross the Turkish border.

Coalition air strikes and Iraqi Peshmerga have since backed YPG in the fight.