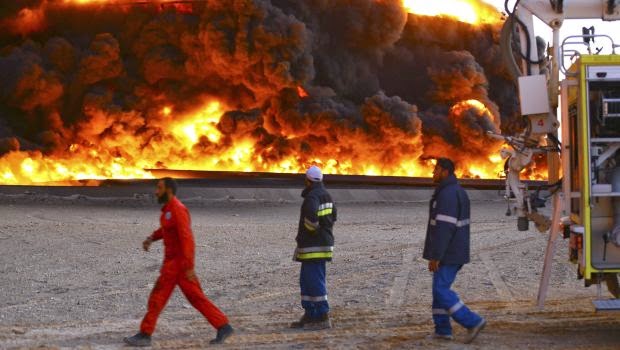 In a statement issued on Friday, one day after Islamist fighters launched a failed attack on Libya’s largest oil terminal, the Abdullah Al-Thani government called on international law enforcement agencies to issue arrest warrants against the leaders, financiers and political and military backers of Islamist insurgents in the country.

The Tobruk-based government called on the UN Security Council to implement resolution 2174 which calls for the immediate implementation of a ceasefire in Libya and the holding of inclusive national dialogue between rival political parties.

Abdullah Al-Thani’s government fled to the eastern city of Tobruk in August after Islamist militias, known as Libya Dawn, seized control of the capital Tripoli and its airport. The Thani government subsequently allied with Libyan National Army commander Gen. Khalifa Haftar who is continuing to besiege Islamists in Benghazi and Tripoli.

Islamists, with links to Libya’s outgoing parliament, the General National Council (GNC), have rejected Thani’s government which was elected in June, installing their own rival prime minister and government in Tripoli.

The statement issued by the Thani government also called on the Ministry of Defense to speed up the approval of the purchase of weapons and military equipment needed by the Libyan army to eradicate “terrorism” in the country.

Dozens of soldiers were killed on Thursday after Libya Dawn militias mounted a failed attempt to seize control of Libya’s largest oil terminal.

Islamist fighters launched an attack on Al-Sidra and Ras Lanuf ports, firing rockets from speedboats. The attackers failed to seize any of the terminals but managed to set one oil terminal south of Al-Sidra, on fire.

“The attack by the so-called Libya Dawn militias represents a serious development in the nature of the conflict in Libya, threatening national unity and leading the country to civil war,” the Libyan government statement warned.

In comments to Asharq Al-Awsat Libyan Information Minister Omar Al-Quairi described the attack as a “systematic operation planned by militias affiliated with the outgoing GNC.”

“The General Authority for Information and Culture strongly condemns this heinous and chilling crime which it regards as a disgrace to the outgoing GNC and its government,” he said.

The incident has confirmed the UN’s inability to protect Libyan civilians, the minister said, calling for the restructuring and rebuilding of the Libyan state military.