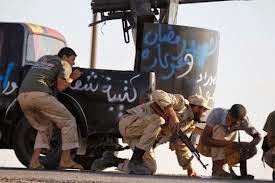 Libya’s official government conducted several tactical airstrikes in the vicinity of the town of Misrata Sunday, another episode in the ongoing war between the internationally recognized government of Prime Minister Abdullah al-Thinni and the coalition of his political opponents known as Libyan Dawn.

According to the official reports, the Libyan air force, controlled by Thinni, hit several targets in the Libyan Dawn controlled city of Misrata, including a sea port, an air force academy near the airfield and a steel mill, the largest in the country, in an attempt to disrupt the town’s economic viability. Representatives for Libyan Dawn confirmed the airstrikes, claiming no immediate victims or damage.

“The airport at Misrata is still working normally. A flight has just taken off,” a representative for Libya Dawn said as quoted by Reuters.

Libyan Dawn took control of Libya’s capital, Tripoli, in August, but they are not recognized as the nation’s legitimate government. The country’s prime minister has been leading a war against Libyan Dawn from the eastern part of the country. The situation is further complicated by the activities of Islamic militants, attacking the nation’s oil infrastructure.

Since Colonel Muammar Gaddafi was ousted and killed after ruling for 42 years, the nation has fallen apart. At this point, Libya is divided by the historical boundaries of its two parts, namely Tripolitania (in the west) and Cyrenaica (in the east). The opposing forces are either Islamist or utterly anti-Islamic and are engaged in a sectarian war, exacerbated by still-existent tribalism and radical jihadi terrorist activity.