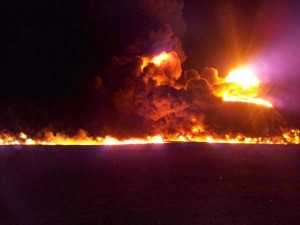 Omar al-Sinki has asked the US and Italy to help Libya extinguish the fire that started two days ago at the al-Sidra oil export facility west of the city of Benghazi after a missile hit a tank, the website reported.

There are 17 tanks at the terminal in eastern Libya.

Firefighters have limited resources and have been unable to put out the blaze, which al-Sinki said could lead to an environmental disaster.

Islamist-allied insurgents, calling themselves “Libya Dawn”, began two weeks ago an offensive to control oil facilities in the area.

The offensive has prompted a counter-attack from military forces backing an internationally recognized government headquartered in the eastern city of Tobruk.

Oil is the main income source for Libya, which has two rival governments and two parliaments.

The North African country has in recent months seen its worst violence since the ouster of longtime dictator Moamer Gaddafi in a 2011 armed revolt.

Libya’s oil output reached 1.6 million barrels per day before the anti-Gaddafi uprising, according to official figures.