You are here: Home / Senza categoria / Yemen: Al-Qaeda ‘in a war of attrition’ 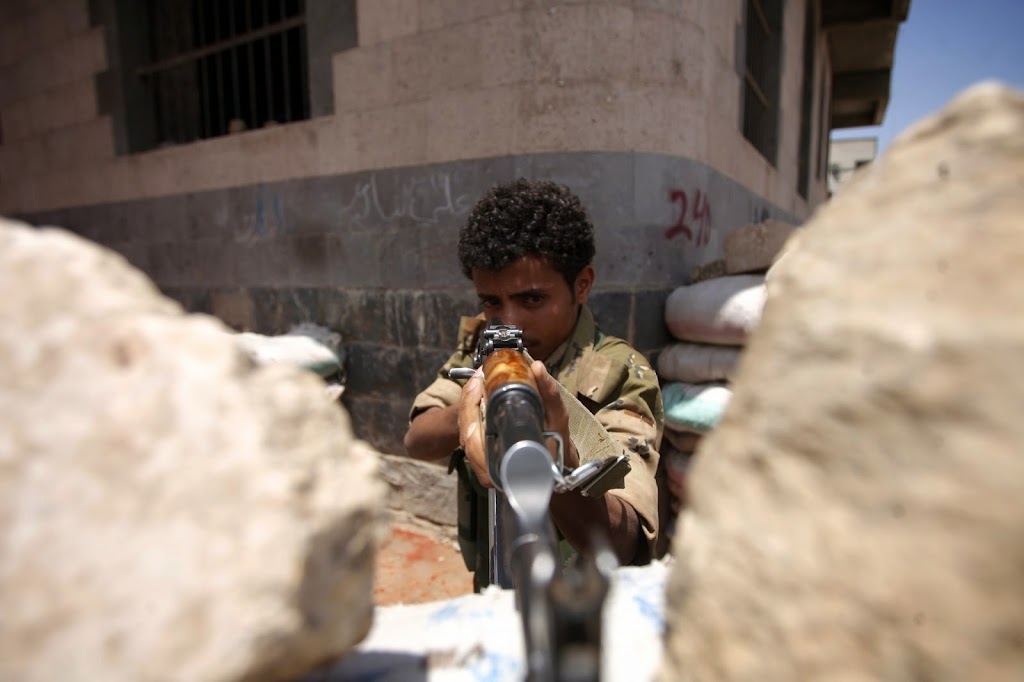 As fighting between Yemen’s warring groups intensified, the recent clashes between Houthi fighters and al-Qaeda in the Arabian Peninsula (AQAP) could turn into a wider sectarian conflict, according to analysts.

On Saturday night clashes erupted between Houthi fighters and tribesmen in Arhab, a tribal area located 35km northeast of Sanaa and a bastion of Islah party supporters. Tribal sources said many Houthi fighters were killed in this confrontation, but there was no confirmation of the exact number of the dead.
Earlier this month, AQAP and tribal fighters attacked positions held by the Houthi rebels in the Yakla mountains in Radaa district of al-Bayda which left 14 Houthi fighters dead.
On Thursday, hundreds of mourners buried the civilian victims of the latest round of violence in al-Bayda province, when, on December 16, a car bomb exploded near a checkpoint in Radaa manned by Houthi rebels, killing 16 girls, nine of whom were from al-Bayda. Another car bomb exploded on the same day, near the house of Abdallah Idriss, a senior Houthi leader, killing 10 people.
A local government official told Al Jazeera that relatives of victims seek justice and compensation.
“Some of the critically injured civilians are in need of urgent medical treatment abroad, but people cannot afford to pay for this,” Tareq Abu Sorema, the director of Radaa’s Ministry of Labour and Social Affairs, told Al Jazeera at the funeral site.
Shortly after Houthi rebels took over Sanaa, and several neighbouring provinces, they quickly advanced into al-Qaeda-controlled regions in al-Bayda, including Radaa city, where they engaged in fierce fighting with forces backed by local Sunni tribes.
Last November, AQAP’s military chief, Qassem al-Rimi, warned the Houthis to brace “for horrors that will make the hair of children turn white”, after the Houthi fighters expanded their presence into AQAP’s stronghold of Radaa.
On Thursday, al-Bayda residents told Al Jazeera that al-Qaeda fighters and tribesmen launched an attack that claimed the lives of scores of Houthi fighters.
“Al-Qaeda killed at least 20 people and injured many others. This is what tribesmen who fight Houthis told us,” a resident said.
Houthis, on their part, declined to comment on the death toll while al-Qaeda posted details of the attacks on affiliated Twitter accounts.
AQAP sources also said that it gunned down Faisal al-Sharif, a pro-Houthi tribal leader in the Yemeni capital three days ago.

Houthi leaders have been keen to portray their war against AQAP as part of the larger “war on terrorism” scheme. “Since arriving in Arhab over a week ago, Ansar Allah has been purging the district and surrounding villages of terrorists,” said Ali Al-Qahoom, a member of the Houthis’ policy-making committee.

But it is precisely the Houthis’ involvement in the “war on terror” which, analysts say, helps AQAP in getting more recruits. “The Houthis’ sectarian nature has enabled al-Qaeda to portray its conflict against them as Shia targeting Sunnis,” Saeed Obeid, a Yemeni analyst told Al Jazeera.

Obeid added that if the government remained weak, the current clashes between al-Qaeda and Houthis could develop into all out sectarian warfare. “The clashes are a recipe for wider war so long as the government is unable to execute its duties.”
In October, Houthis announced that they were driving al-Qaeda fighters out of their strongholds in Manaseh, Qaifah and Khoubza regions in Bayda province. The Houthis demanded hundreds of displaced families who fled their homes during the clashes to return home.
However, despite the Houthis’ quick and visible victories, Obeid thinks that they do not maintain an upper hand in the battles against al-Qaeda.
“Al-Qaeda’s strategy is to engage in a war of attrition with its opponents. Al-Qaeda is striking all over Houthi-controlled areas. They detonated bombs and gunned down Houthi-linked figures in Sanaa. They also mounted deadly attacks on the Houthis in Bayda.”
Source: Al Jazeera