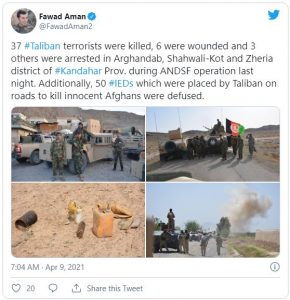 The Afghan National Defense and Security Forces (ANDSF) have killed 68 Taliban terrorists and wounded 74 others in Afghanistan. The operations were carried out on April 7 in Herat, Faryab, Farah, Badakhshan, Kunduz and Kandahar provinces amid the peace talks. The deputy spokesman for the Ministry of Defence Fawad Aman on his Twitter handle shared the news, like reported by republicworld.com.

Fawad Aman in his post informed that 68 Taliban terrorists were killed and 74 were injured by an operation conducted by ANDSF. They operations were carried out for 24 hours in various provinces of Afghanistan. The Afghan National Army(ANA) also defused the 211 IED’s that were placed by the Taliban on public roads.

The Defence Ministry in another statement indicated that the operations carried out by National Defense and Security Forces were backed by air support. The operations that were carried out in Arghandab and Zherai district of Kandahar province were backed by air support, reported ANI quoting The Khaama Press News Agency. 19 Taliban terrorists and 12 others were wounded in the operations. The armed forces also destroyed the arms and ammunitions of the terrorists. Afghan National Army discovered and defused 59 Taliban planted bombs in both of the districts. The Taliban has not released any statement about the casualty figure published by the Ministry of Defense.

The Ministry of Defense Spokesman Fawad Aman informed that 37 Taliban terrorists were killed and 6 others were wounded. The ANDSF arrested 3 others were in Arghandab, Shahwali-Kot and Zheria district of Kandahar province on March 8. The armed forces also detected and defused 50 IEDs which were placed by Taliban on roads. The Taliban and the United States in February 2020 have signed the Doha Agreement. According to the agreement, US will withdraw from Afghanistan if the terrorist group follows counter terrorism commitments.