You are here: Home / Africa / Libya continues to slide down a spiral of violence 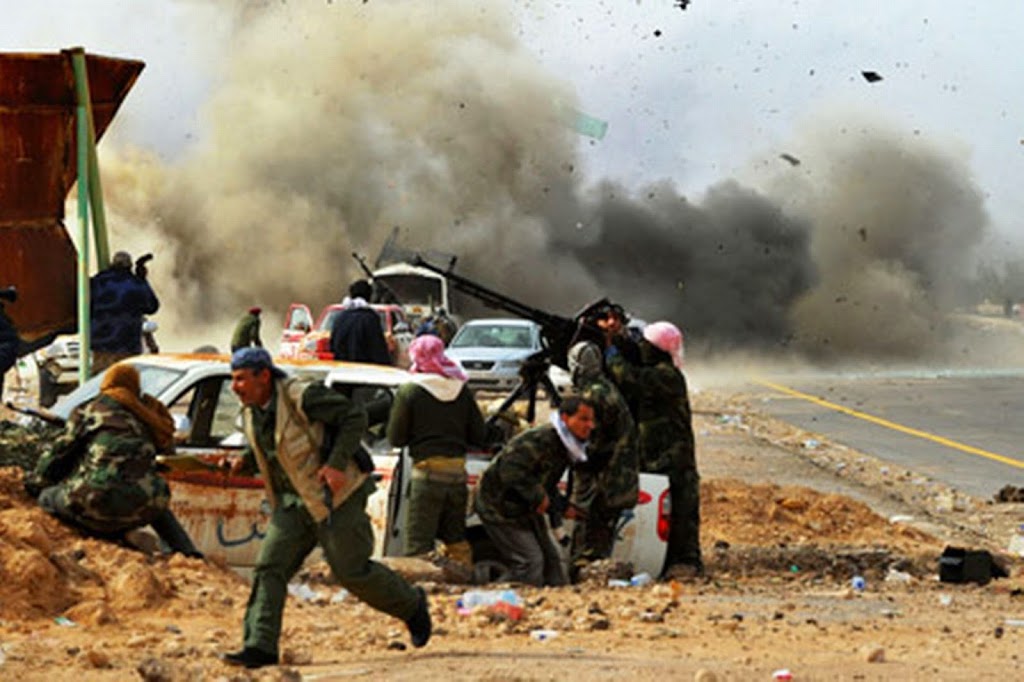 There seems to be no end for the spiral of senseless violence engulfing Libya. Last week, Operation Shuruq forces assaulted Sidra’s oil terminal with speedboats equipped with rockets.
The attack was repelled by Operation Dignity and federalist forces entrenched in the port, but ultimately set on fire one of Sidra’s nineteen oil tanks. The fire is still out of control of fire-fighters and is esteemed to have cost the country already 1.8 million barrels of crude.
In retaliation for this attack, on Sunday 28 December Operation Dignity air forces carried out, for the first time since the start of this crisis, multiple airstrikes over Misrata, targeting the city’s airport, aviation academy, maritime port and steel factories. Although no casualties were reported and no significant damage was inflicted on infrastructure in the city, the repetition in the future of such attacks should be considered likely as long as Operation Shuruq is ongoing.
Most importantly, the extension of fighting to Misrata and the adoption of what are perceived as ‘collective punishment’ tactics on both sides could very well mark the start of a more intense and widespread phase of military confrontation characterised by a significantly larger mobilisation leading Libya back into a full blown civil war.
The present week, unfortunately, started off to the same tune. On Tuesday 30 December, a car bomb was detonated outside the Tobruk hotel hosting the House of Representatives. This was possibly the result of a suicide attack, but details about the incident are still scant and emerging in contradictory ways; a good indication of the lack of governmental capacities and efficient security apparatuses marring both the Tubruq and Tripoli governments.
Last week, Bernardino Leon confirmed that both sides agreed, yet again, to start a second round of negotiations on Monday 5 January.
The exact location for negotiations is still not know and Leon suggested to find a location outside of Libya due to diverging views as to where these should be held inside the country.
Whilst the UNSMIL Chief is surely working hard to bring all Libyan sides around the negotiation table, with the exception of the UN-designated terrorist organization of Ansar al-Shari’a, one is left but wondering what will it take for Libya’s Western partners to step up their engagement and challenge the trends and forces currently pushing Libya down the same route of  countries like Syria and Somalia.
The endless threat of imposing ‘sanctions’ on those responsible for undermining dialogue initiatives have been repeated ad nauseam for the past three months and, at this stage, need to be actioned as soon as possible.
As the country’s oil output is shrinking back to pre-July levels and the price of oil on the international market plummeted today to a five-year low, it seems that is now or never for both of the failing Libyan establishments to receive a harsh reality check about the country’s overall status and their delusional tactics.
Source:  libya-analysis